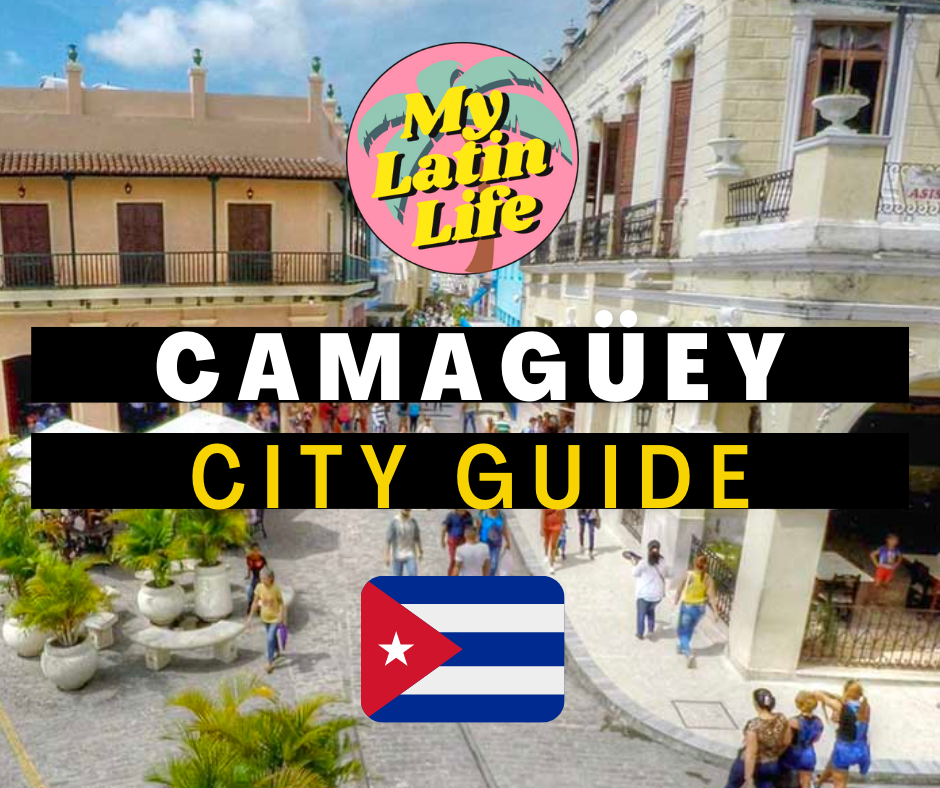 Never heard of Camaguey? Guess what – nobody else has, even though it’s Cuba’s third largest city. Visiting Camaguey is an authentic experience,  and you’ll have the city all to yourself. In 2008, Camagüey’s old town was named a UNESCO World Heritage Site. The city was one of the seven original settlements founded by the Spanish in 1515. Camagüey is notorious for its infamous confusing street layout designed to disorient attackers. Expect lots of colonial architecture and vibey streets. It’s also known as “the City of Clay Pots”. You’ll need a visa to visit Cuba, so reminder to get a Green or Pink Tourist Card before you go.

Camagüey has a strong sense of passion for art and culture. It is also home to a large population of international students that make a colorful contribution to the society and overall vibe of the city. Though Havana is considered the country’s cultural epicenter, Camagüey stands out with important cinematographic, theater, and visual arts festivals. The city feels smaller than Santiago de Cuba, but the vibe may suit some people better.

Conga Camagüeyana is a typical folk music; you should definitely find a live musical show while you’re in town!

Due to Cuba’s government directly preventing access to certain websites, there’s only a small number of expats in Camagüey. You can connect with them through Trip Advisor forums. Cuba legalized private Wi-Fi in homes and businesses, although one must obtain a permit to have access. The use of VPNs is very popular when connecting to public WiFi (to protect your data) and to access VoIP services. VPNs with servers worldwide can help you bypass geo-restrictions so that you can use your local online banking services while visiting Cuba.

Beware that Spanish is a requirement to get around in this city.

WHERE TO STAY IN CAMAGÜEY

Camaguey is split in two by a river running through the city. The best area of Camaguey to stay in is in the downtown between the Convention Center and  Parque Ignacio Agramonte. Really anywhere on the west side of the river in the centro area is pretty good. Lots of colonial buildings and the area is rather built up. The second best place to stay is near the Parque Casino Campestre on the otherv side of the river. If you stay in this area, you’ll have access to a nice park to go for walks in or chill and drink a coffee. It’s also a little bit quieter on this side of the river.

DAY TRIPS & THINGS TO DO IN CAMAGÜEY

Outside the city, the largest tourist attraction in the province of Camagüey is without a doubt, Santa Lucía Beach in Cayo Sabinal—quintessential Caribbean beach at its finest.

Within the city, Cinema Street is an entire laneway made up of five cinemas, cafes and other business paying homage to the big screen.

Getting lost in Camagüey’s labyrinth-like streets is also part of the fun.  Set out to explore and soak up the workings of a conventional Cuban city.

There are more than a dozen churches and plazas to visit in this city. Some of the best ones are: Iglesia de Nuestra Señora del Carmen, Iglesia de San Juan de Dios, and finally, Iglesia Nuestro Corazón Sagrado de Jesús which looks like it belongs somewhere in Europe.

The major squares are surrounded by leafy trees and open-air cafes are perfect for people watching, plus, they’ve got free Wi-Fi zones.

Casa de la Trova is the hotspot in Camagüey. The music doesn’t start until 10 p.m. but definitely worth a visit. Nightlife in Camaguey is some of the best in all of Cuba. You’ll be able to find a bit of rumba.

Gran Hotel Bar Terraza: At the top of the Gran Hotel, its cocktail maestro will prepare mojitos and daiquiris while you gaze at the city’s premier vista – all Camagüey laid bare before you. Duck below to the swimming pool for the bizarrely addictive water ballet shows, happening several times weekly at 9:15pm.

Bar El Cambio: A dive bar with graffiti-splattered walls and interestingly named cocktails, this place consists of one room, four tables and bags of atmosphere.

Bar Yesterday: This Beatles-themed bar has a large inner patio and life-sized bronze sculptures of the Beatles. Locals come for snacks and chilly brews.

COST OF LIVING IN CAMAGÜEY

According to LivingCost.org, you’ll need a minimum of $849 USD/month to live in Camagüey, Cuba.

IS CAMAGÜEY SAFE FOR TRAVELERS AND EXPATS?

Most crimes against tourists are limited to petty offences, such as pickpocketing or purse-snatching.  As with any locale you are unfamiliar with, you should be alert while traveling within large crowds.

Tap water in Camagüey is treated. You could drink it without having a major problem. Just beware that the bacteria in the water in a foreign country is different so it’s best to give your stomach time to adjust.

HOW TO GET TO CAMAGÜEY

Ignacio Agramonte Airport is the major airport that serves Camagüey. Connecting flights arrive daily from Havana, and the two airlines that serve the airport are Zoom and Cubana airlines. To get to the city from the aiport, your best bet is to either take the bus or hail a taxi. Taxi service to Camaguey will cost about $4.

Rail service is another transportation option when traveling to Camaguey but it is very slow and often runs late, though it is a little cheaper than the bus.

Though the colonial buildings aren’t to the same finish as in Trinidad, the tourism services not as polished as Viñales, and it lacks Havana’s city buzz… Camagüey is where the real Cuba hides. This is an authentic, historic city. You won’t see too many tourists here.

The city is as well suited to digital nomads and travelers as you’ll find in Cuba. There are cool, vibey streets and UNESCO heritage sites. Local culture is amazing and sure to impress the traveler. There are great beaches nearby and things to do. The city even has free wifi zones!

Still need your Cuban visa? MyLatinLife recommends EasyTouristCard.com for getting your Green or Pink Tourist Card.