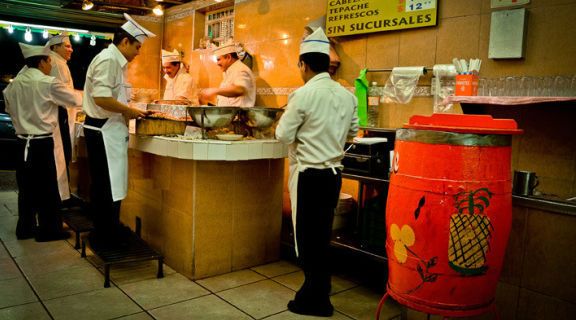 Mexico street food is highly praised, consistently ranking high among the best destinations in the world to grab a quick bite. And locals know it, too! It is estimated that 58% of Mexicans will indulge in street food at least once per week. They’re certainly doing their part to support small businesses.

If you’re a tourist traveling to Mexico, you may be overwhelmed by the sheer amount of options you’ll encounter on any given city block, particularly if you’re exploring one of Mexico’s larger cities, like Mexico City, Guadalajara or Monterrey.

But not to worry! We’re here to make that decision a bit easier on you. Here are 18 Mexican street food delicacies that we suggest trying while south of the border.

The taco is — without question — Mexico’s most prevalent street food. In every town, no matter how big or small, you will find someone selling some variety of taco.

As far as the origin of the taco goes, well that’s up for debate. Some say it pre-dates the arrival of the Spanish to Mexico, whereas others claim its beginnings lie with 18th century silver miners.

Regardless of when it came on the scene, we’re just happy it’s here. Whether or not you stick with a classic like Tacos al Pastor (pork) or get more adventurous with some Tacos de Lengua (tongue), when it comes to the versatile taco, you’re sure to find something to suit your tastebuds. It is, after all, the backbone of Mexico street food!

The tamale (or tamal) is enjoyed in many Latin American countries. Its origins in Mexico date back to the time of the Maya and Aztecs. The Mexican version is steamed corn dough with an assortment of potential fillings, such as pineapple, raisons, or dulce de leche (tamales de dulce), or pork, chicken, beans and/or cheese. Cheap, filling and delicious — it’s not hard to comprehend tamale’s popularity across the region! 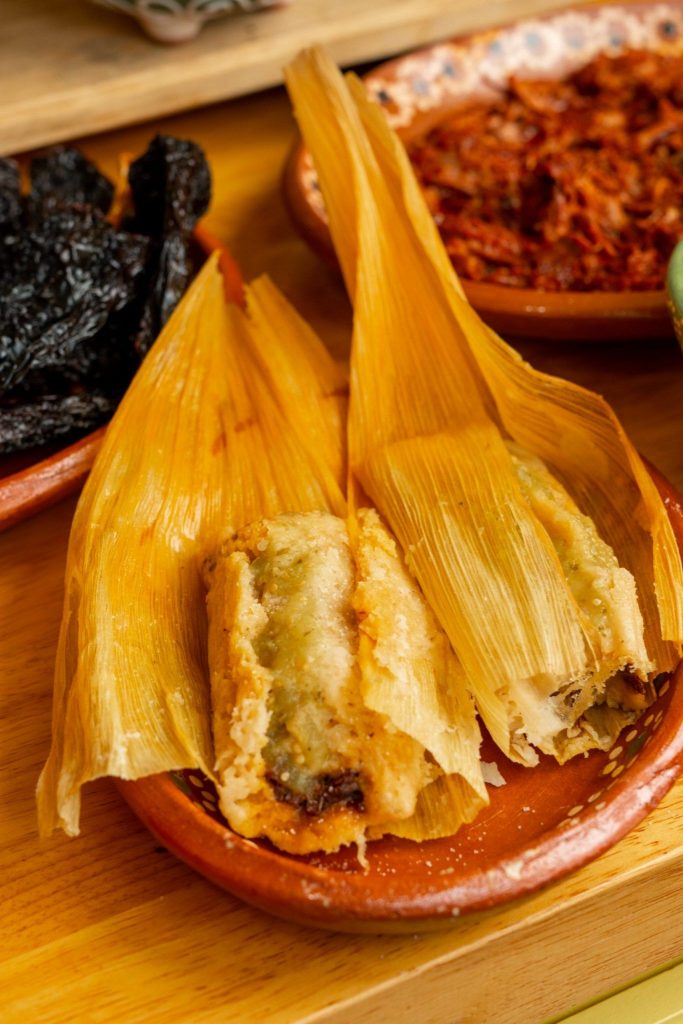 In Mexico, Barbacoa refers to the slow-roasting of an entire sheep or goat. The Mexican state of Hidalgo is well-known for this tasty tradition! Traditionally, barbacoa is cooked in the ground, covered by agave leaves. Although these days, in the interest of time, more modern forms of slow cooking are applied. This dish is most typically enjoyed on Sunday mornings with a healthy amount of tortillas to accompany the succulent, fatty meat. 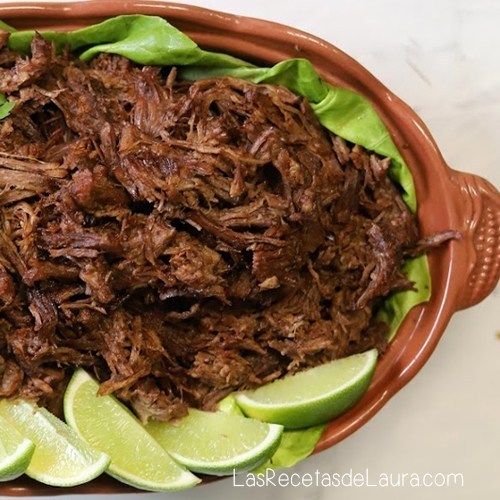 Guisados (stewed) are meats and vegetables that are, well, stewed, as just mentioned! On the street, you’ll often see them presented like this (see picture below). It’s not uncommon to see street stalls — particularly in Mexico City — that specialize in tacos de guisado. 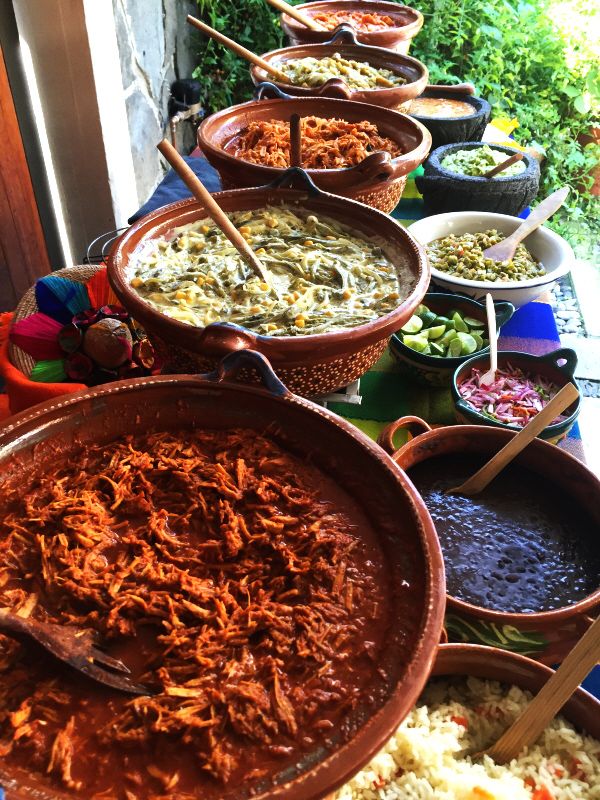 Mexican Tortas are — to put it simply — sandwiches. But, before you scoff at a lack of creativity, these things are EPIC. And great value to boot. A Torta will often run you less that $2.00 USD and be absolutely packed to the gills with meat, cheese and vegetables, not unlike the picture below. Tortas are most popular in Mexico City, so if you find yourself in Mexico’s capital, definitely give it a try! 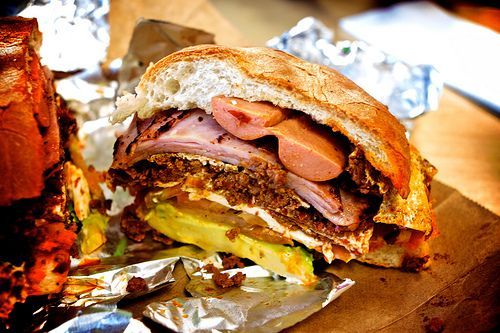 The quesadilla, a dish you’re probably already familiar with. What you may not know, however, is that they’re so much more than cheese and a tortilla. For instance, one of the more popular ingredients to include in a quesadilla is flor de calabaza (squash blossom). Other popular fillings include, chicken, beef, pork or even shrimp. Feel free to choose between the more traditional corn tortilla or a flour tortilla. 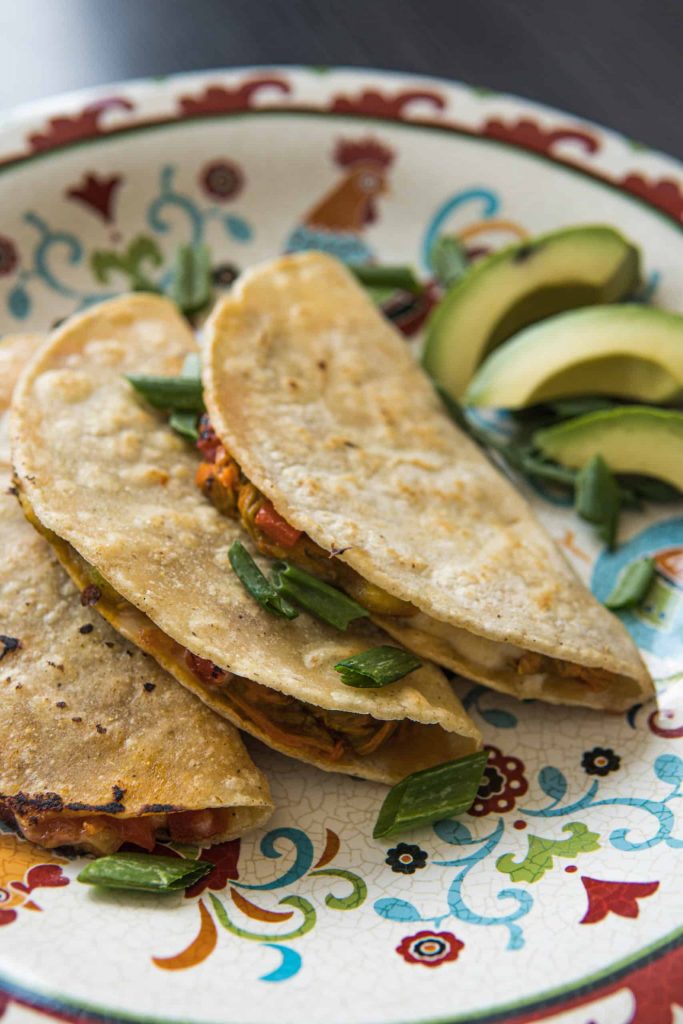 A popular Mexican street food from the state of Jalisco. Traditionally, Birria is made from goat meat, chilli pepper, garlic, cumin, bay leaves and thyme, but these days it’s not uncommon to find beef birria in the streets of Mexico. It’s commonly consumed in the mornings (hangover cure!) and is often accompanied by its delicious consommé, as pictured below in the paper cup. 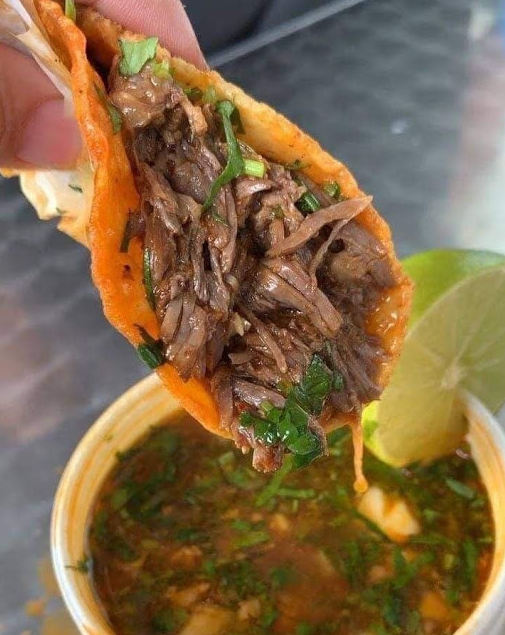 A fried corn base slathered with refried beans and stacked with toppings of your choice. What more could one ask for? Think of it as a vertical taco with a thicker tortilla. You’ll encounter sopes more in Central and Southern Mexico. 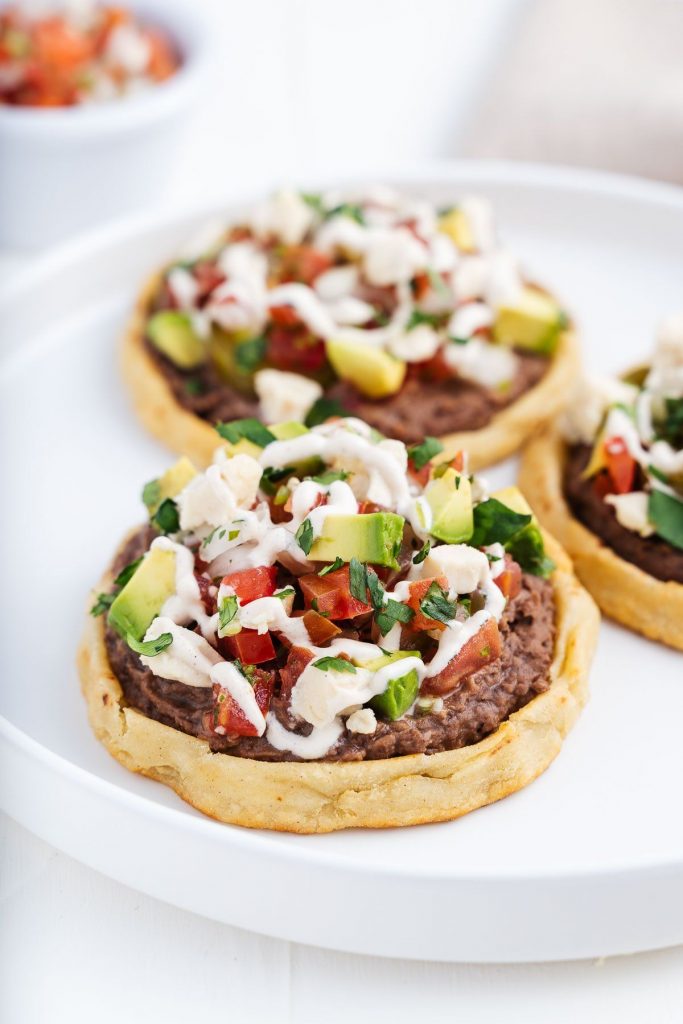 Candied sweet potatoes. These are big in Mexico City — you’ll hear the carts rolling at night thanks to their trademark steam whistle. Served plain, with condensed milk or jam (as if they weren’t already sweet enough!) camotes enmielados make an ideal evening snack. 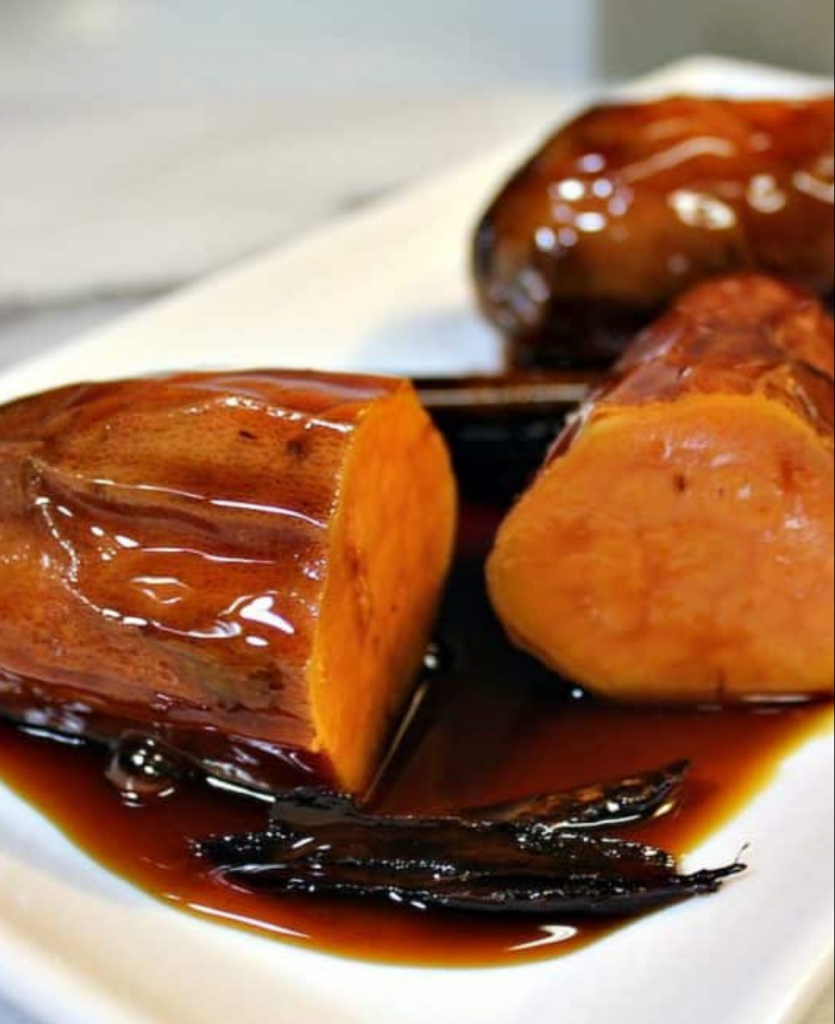 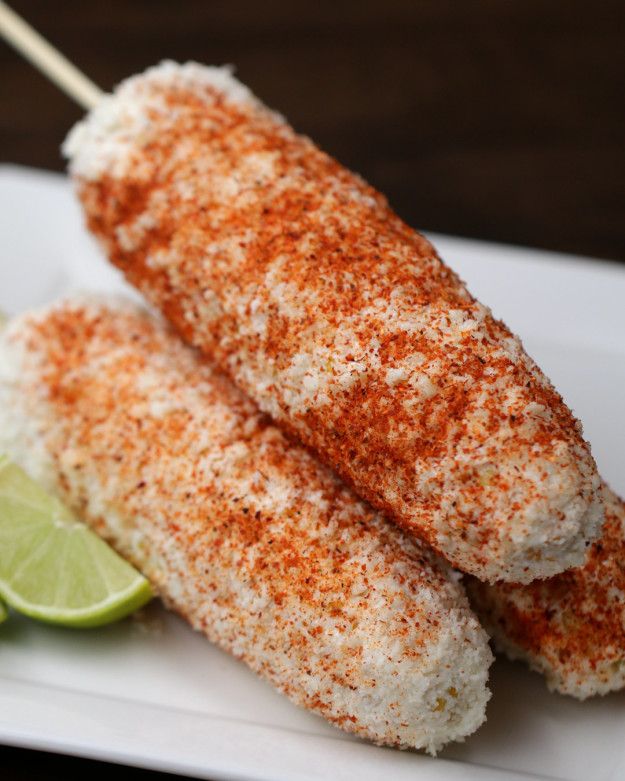 Churros don’t need much of an introduction. Originating in either Spain or Portugal (up for debate), churros have spread throughout the Americas. Indeed, you’ll find a version of them in nearly every Latin American country! Flour, water, salt and sugar…sometimes the best things truly are simple. 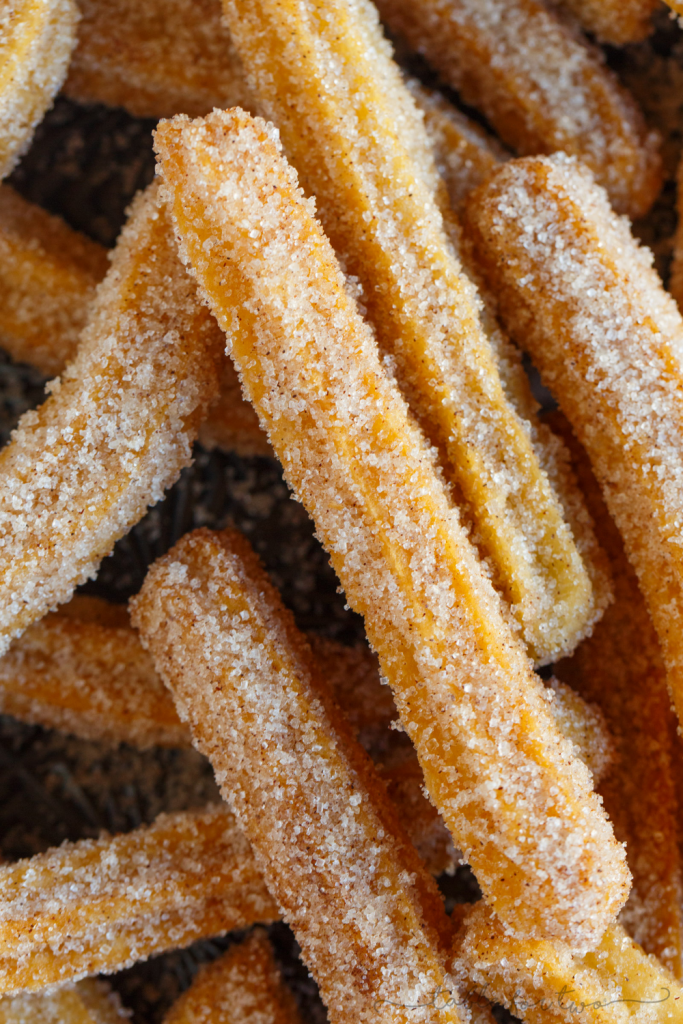 A favorite and decadent breakfast here in Mexico consisting of cut up and fried tortillas, cream, cheese, onion, egg, salsa and meat if you’re feeling extra hungry! The origins of the dish are unknown, but apparently date back all the way to the late 1800s. It’s a logical breakfast dish, as those dry tortillas not eaten during last night’s dinner won’t go to waste 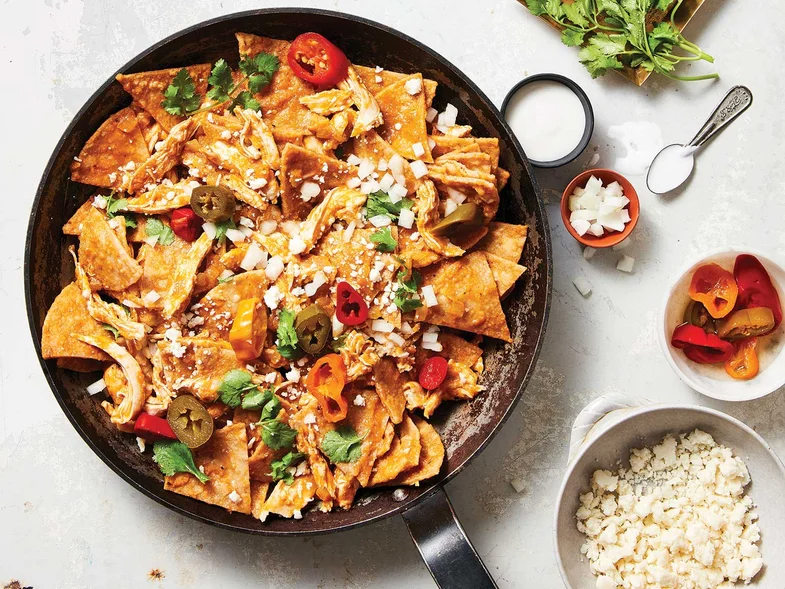 A traditional dish from the state of Oaxaca. A huge, toasted tortilla covered with…well, all kinds of stuff! The standard would be a layer of refried beans, lettuce/cabbage, avocado, meat of your choosing, Oaxaca cheese and salsa. Sometimes referred to as a “Mexican pizza” thanks to the resemblance it bears. And when it comes to taste, this dish gives pizza a run for its money! 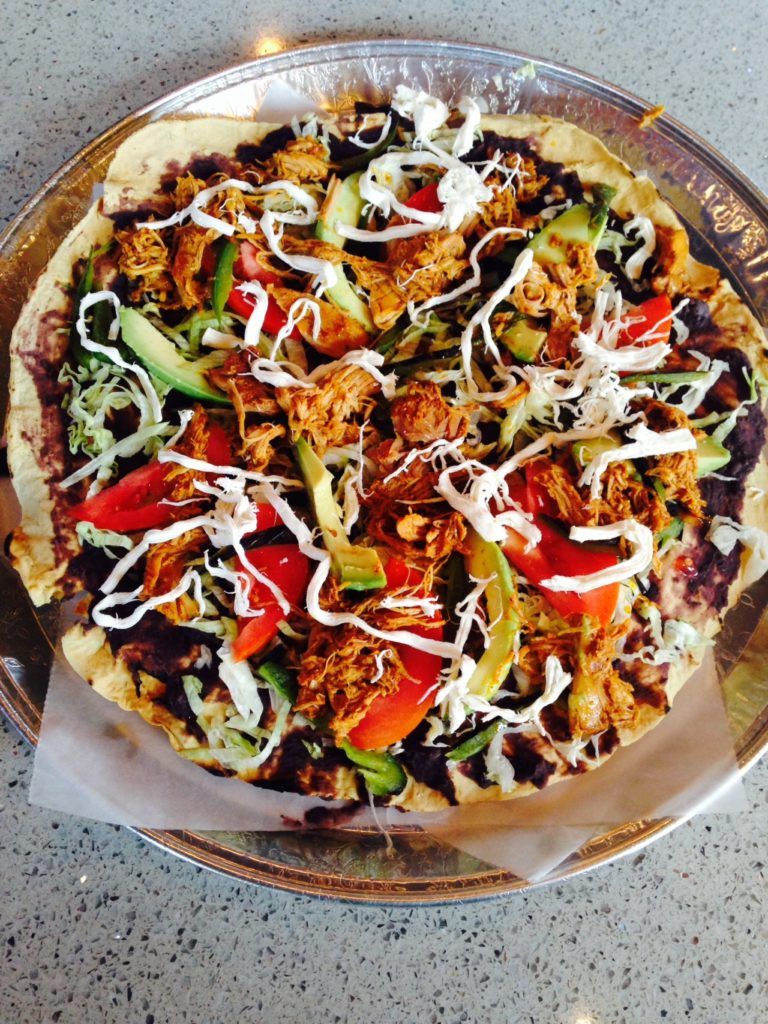 Aguas Frescas (cool waters) are beverages made up of fruit, sugar and water. They’re hugely popular in Mexico, and you’ll usually see them in large containers like the photo below! Two popular flavors include Jamaica (Hibiscus flower) and Horchata (a rice-based drink with cinnamon and vanilla) 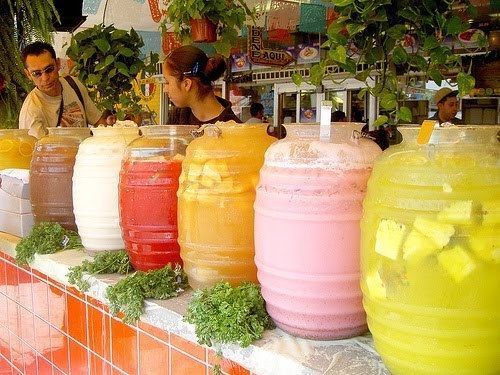 I know what you’re thinking: Burritos aren’t Mexican…they’re Tex-Mex! Well, you’re partially right. Although details on where and when are vague, the burrito almost certainly originated in Mexico. But the USA is where it really gained traction. Whereas you can find burritos all over the United States, in Mexico they are only popular in the north of the country, namely Ciudad Juarez. That said, more “American-style” burrito restaurants have recently been popping up in larger Mexican cities. A tangled culinary and cultural web we weave! 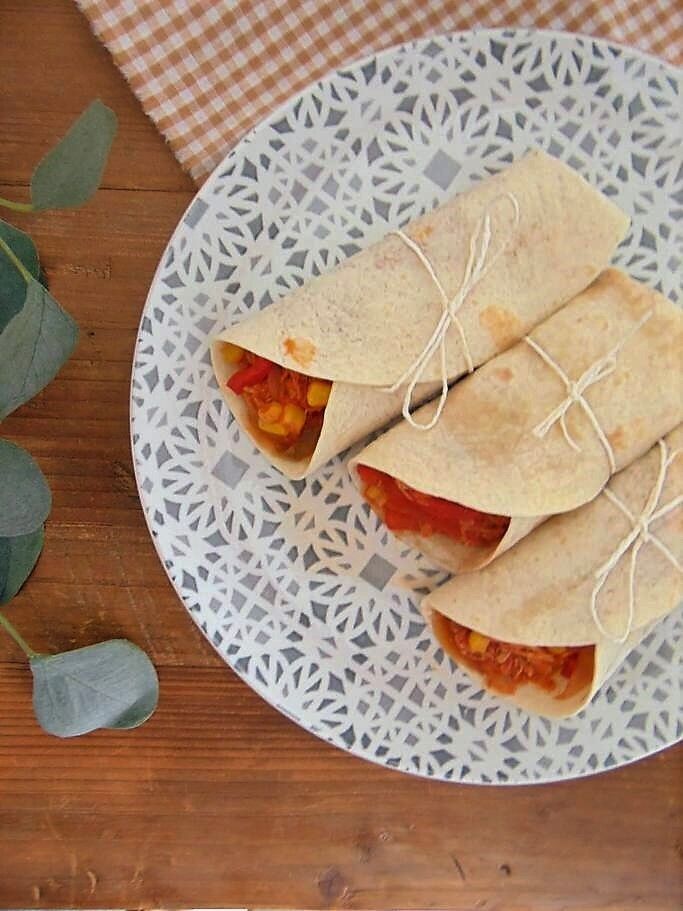 A dessert native to the state of Yucatan. A dessert that we feel doesn’t get the credit it deserves, as it’s somewhat difficult to find outside of its native state. It’s a rolled crepe filled with cajeta, condensed milk, jam, melted chocolate and/or queso de bola (edam cheese). It was invented in the 1930s by the owner of an ice cream shop in an effort to attract more customers when winter came. Clever indeed!

Last on our list is an item that will never, ever be mistaken for high cuisine: Dorilocos. Bascially, you rip open a bag of chips, add jicama, cucumber, lime, peanuts, hot sauce, chili powders, chamoy (a sweet/salty sauce made from picked fruit) and…basically anything else you want on it. We’ve even seen gummy candies.

Based on sheer novelty alone, it’s a must-try Mexico street food. But we’ll forgive you if you don’t finish the whole bag. 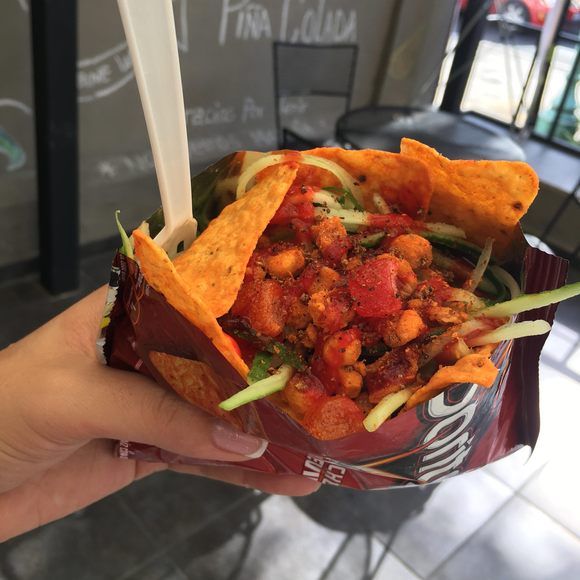 Hopefully we’ve provided some insight into the marvels of Mexico street food. It’s truly one of the shining stars of Latin America when it comes to cuisine. But don’t take our word for it. It’s time you get down here, loosen that belt and experience it first hand.