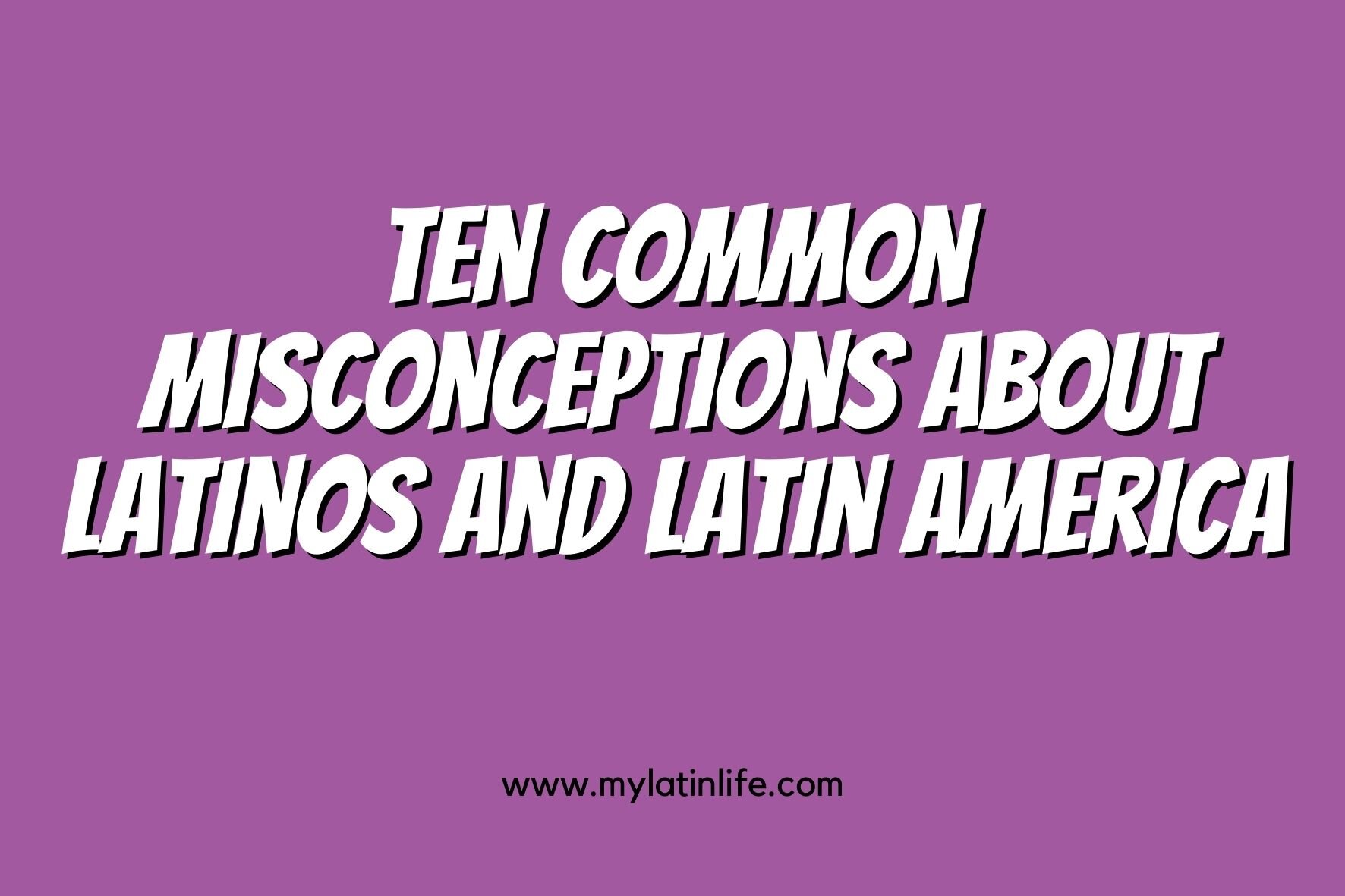 I can be pretty tough on Latinos and Latin America. The region is far from perfect, and there are many things that make living down here frustrating.

In Canada, if I want to get Internet set up in my place it’s an easy process. A mere phone call, and within the week there is a qualified individual in my living room setting everything up and answering any questions I may have.

Same thing goes for getting a SIM card or a bank account.

In Latin America, doing such things is a test of patience. You will rarely speak to someone competent. Something will go wrong. You will get mixed information. And if you do manage to get something like Internet or television set up, they will often shut off your service for no apparent reason.

Another great thing about Canada is that no one tries to screw me over. If I buy something from someone or jump in a taxi, I can be fairly sure that they are charging the same rate as they would anyone else. As a foreigner in Latin America, the locals will try to rip you off relentlessly. Taxi cab rides, tours, restaurants bills. You always must be vigilant when performing a transaction.

That being said, there are many ways in which Latin America and Latinos are unfairly stereotyped. While I tend to believe generalizations about people and cultures exist for a reason, meaning that there is at least a small element of truth to them, it’s unjust to extend the cultural idiosyncrasies of a small group of people to an entire region.

What follows are 10 common stereotypes and misconceptions about Latinos and Latin American that don’t represent the region or the people as a whole.

1) The People Are All Indigenous

The racial makeup of Latinos is much more diverse than most people think. If you’ve never visited Latin America, you may think that everyone looks like this woman.

In reality, not all people in Latin America are full-on Indigenous. In fact, most are Mestizo, which means they are a mix of White and Indigenous. Many people are of 100% African or European stock, despite their families having lived in Latin America for centuries. For instance, in the north of Mexico, much of the population looks ethnically white. For instance, having white skin, brown hair and blue eyes, while I was in Durango, I didn’t stand out at all. I could easily blend in as a local (until they heard me speak, of course!).

The south of Brazil, Argentina, Chile and Uruguay have very high Caucasian populations, and in every single Central and South American country, I guarantee you’ll be able to find a local with lighter skin than you. Countries such as Peru and Panama have visible Chinese populations. Brazil has massive Japanese and Middle Eastern communities.

Countries like the Dominican Republic, Cuba, Brazil and Colombia have a large black population.

Latin America is much, much more racially diverse than most would imagine.

Before travelling to Latin America, I assumed every country was going to be sunny, and have 30 degree Celsius weather year round.

How wrong I was.

While it’s true that many places in Latin America are blisteringly hot (Mexicali; Paraguay), there are many others that are much more temperate (Bogota; Quito). Some places are downright cold – for instance, snow is not uncommon in the south of Chile or Argentina.

Latin America is a huge region. Whichever type of weather you prefer, LATAM will have a city to your liking.

Latin America is the most dangerous region on earth. Drug trafficking, murder and crime has been a problem here for some time now.

But that does not mean that there are no safe cities. In fact, many major cities report crime rates that are lower or on par with many American cities. Santiago, Chile for instance is extremely safe. You’ll probably feel more secure walking the streets here than you would in Atlanta or Chicago. Same goes for most smaller cities in Argentina.

Even in more dangerous countries like Colombia and Mexico, there are hundreds of places where violent crime is almost non-existent.

Not everywhere in Latin America is poor! If you’ve never been to the nicer parts of Mexico City or Sao Paulo, you’d be stunned at just how modern everything looks.

And, as for the people, not everyone is struggling. Believe me. I’ve met countless people whose parents make more money in 6 months than my parents made in a year.

It’s common to think that Latin American countries have huge income disparity, with a few people holding all of the wealth, leaving the remaining population struggling food their next meal. However, if you visit countries like Mexico, Colombia, Peru or Brazil, you’ll find that this is changing. There is a growing middle class in these countries that live much like the middle class does in the United States. They may not have the latest car or nicest apartments, but there are many people that can afford two vacations a year and eating out once a week.

Although there is much development that needs to occur in Latin America before it can reach first world standards, by no means is everyone either super rich or super poor in all of these nations.

This one caught me off guard during my first trip through Latin America. I assumed every country would be dirt cheap. $2 meals, $1 beers and $10 hotels.

Again, I was wrong.

While Mexico is a very affordable place to live, as are the first few countries of Central America, once you get down to Panama and Costa Rica, you’ll find that prices are only about 20% cheaper than the United States.

If you were to head to Sao Paulo, Rio, Florianopolis, Montevideo or Santiago right now, you’d find your living expenses to be on par with that of a small or mid-sized American city.

For the most part, yes, most of Latin America is very affordable. But don’t expect to get by on much less than $1000 a month anywhere worth living.

6) They All Eat Tacos Or Rice And Beans

Many people think that everyone in Latin America eats tacos. Truth is, they only really eat tacos in Mexico. Rice and beans isn’t as common as you might think, either. It’s big in Central America and Brazil but not as common elsewhere.

In Argentina, you’ll be able to find a steak far easier than you will a taco, and good luck finding fresh corn tortillas in Peru, where seafood, pollo a la brasa and/or meat and potatoes is much more likely to be on the menu.

The Latin Lover stereotype holds strong among Americans and Canadians. Most equate Latinos with fiery passion, hyper-sexualization and suggestive dancing.

By no means is this true for all Latinos. Many can be surprisingly reserved and have conservative attitudes toward sex, such as waiting for marriage.

On the Caribbean coast you may have your sex-crazed stereotype confirmed somewhat, but roll through smaller cities in the mountains of Peru and Ecuador for instance, and what you’ll find is far from a sex-obsessed culture.

There is no denying that Catholicism is big in Latin America. Brazil and Mexico are reported to have among the highest population of Catholics in the world, and 9 times out of 1o if you meet someone who is religious, they will be Catholic.

But, not everyone goes to church and follow religion. In fact, when I was living in Mexico City, most people I met had stopped attending church as soon as they moved out of their parents house. And I definitely never encountered any issues with not having sex before marriage.

Like everywhere else outside of the Muslim world, religion seems to be slowly dying in Latin America. In smaller cities you’ll find that the traditions still hold strong, but in major metropolises the devotion to Catholicism is usually paid only in lip service.

9) They Can All Dance Salsa

Contrary to popular belief, salsa is not popular everywhere in Latin America. Sure, every country will have some version of it, but hit the bars and clubs in Colombia and you’re much more likely to be dancing to Reggaeton or Top-40 hits.

The only places where I wasn’t able to avoid salsa entirely was in smaller Mexican cities, where, inevitably, any bar you go to, at some point in the night will throw on a few salsa songs.

However, I believe this has more to do with Mexicans not really knowing how to dance anything else aside from salsa and (debatably) cumbia (Mexicans – although much better than Americans or Canadians – don’t have a reputation in Latin America for being good dancers).

This one is true.

Only kidding! While Latinas are probably a bit more jealous than what you may be used to, it isn’t always the case,

I hope I’ve helped dispel some common misconceptions and stereotypes about Latinos and Latin America. As frustrating as the cultural differences and norms may be at times, they are not insurmountable.

So far, the pros of living in a region I’ve always been fascinated by outweigh the cons.