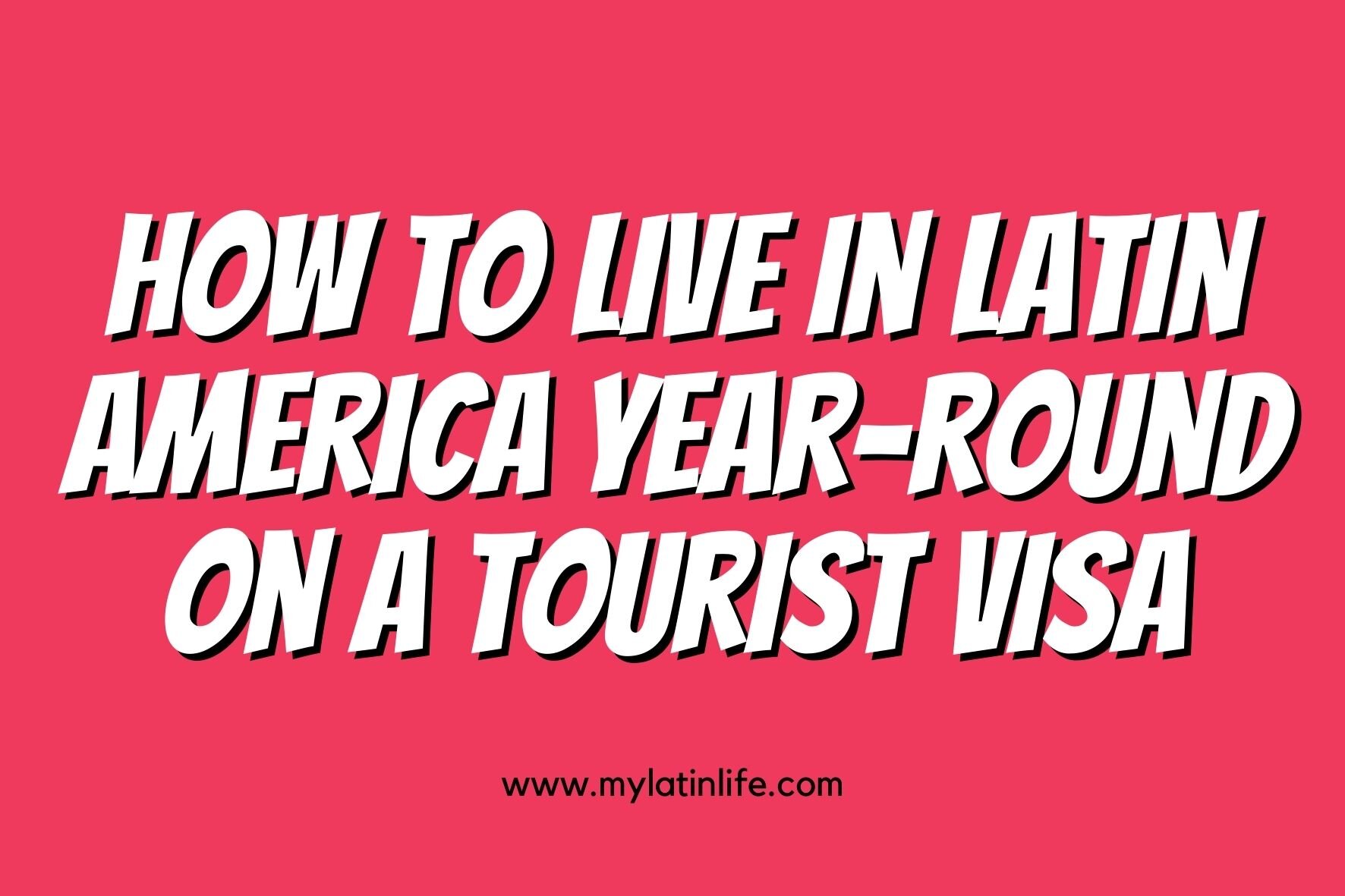 Today I want to talk about living in Latin America year-round on a tourist visa.

This article should help out digital nomads and other location independent workers who make their living online, folks living off their investments or savings who, for whatever reason, may not be eligible for residency and/or anyone who is scouting out countries to live in Latin America.

I myself have used these strategies to basically live in Latin America full-time for the past several years.

And the good news is, these strategies are completely legal (well, all but one option…technically, but we’ll get to that).

I’ll be breaking down three ways you can stay in Latin America year-round. The countries I’ll be using as examples are based around the most popular countries among my readers.

If you don’t see your preferred country come up, don’t worry! It doesn’t mean it isn’t an option. It simply means you’ll have to do a bit of research for yourself ;).

Here’s how to live in Latin America year-round on a tourist visa.

Some countries in Latin America don’t place any calendar year restrictions on a tourist visa. This means that, right before your tourist visa is up (typically after either 90 or 180 days in most countries), you can simply travel outside the country for a few days, come back and receive another tourist visa.

Here are some countries where border hopping is ‘allowed’.

CA-4 Countries (El Salvador, Guatemala, Honduras, and Nicaragua) – However, you will have to border hop to a non CA-4 country in order to renew your tourist visa when you come back.

In all of the above countries, you can essentially live year-round on a tourist visa, granted you take a trip out of the country before the respective tourist visa expires.

Rules regarding how long you have to be out of the country to receive a new tourist visa upon arrival without any issues are incredibly vague in Latin America. Some folks hop the border by land, get lunch, and come back without any difficulties, whereas others report having to stay out of the country for a minimum of 3 days before being allowed to re-enter and receive a new tourist visa.

Here are my two simple suggestions for avoiding problems.

1. Stay out of the country for at least a week – Better safe than sorry. While some tourists report being able to return to the country the same day, other report problems. A general consensus is that, in most countries, staying out for 72 hours should do the trick. I suggest playing it even safer and staying out a week or more. Also, if you’re finding yourself in a country for years and having to do border hops either every 90 or every 180 days, I suggest changing the lengths of your trips, i.e. for one trip, stay outside for a week, for your next, stay outside for three weeks, etc.

If you play it like that, you’re unlikely to have problems.

2. It’s usually better to re-enter by plane as opposed to land – As far as visa runs go, land borders are generally more difficult (more ‘porous’ borders that see a ton of foot traffic are exceptions to this — the Ciudad del Este crossing to Paraguay/Brazil and the Tijuana land border to the USA, for instance). You may encounter dishonest customs officials who will try to get bribe money out of you if they expect you’re doing border runs. In my experience, re-entering a country by air is your best option. Since they are used to seeing people from a variety of nationalities, they are less likely to single you out and much more likely to take a quick glance at your passport, ask you a question or two and then stamp you through.

Unfortunately, border hopping won’t be an option in every Latin American country. Some make things harder for you to stay. These countries limit your days per calendar year, meaning that you can only stay a certain amount of days in the country each year (usually 90 or 180 days).

Here are some countries where border-hopping is not allowed.

In Brazil and Colombia, you will receive 90 days on arrival. If you want to stay longer, you will have to apply for another 90 days at an immigration office. After that, you will have to leave the country for 6 months before being eligible to return.

Ecuador will only grant tourists 90 days per calendar year. If you want to stay longer, you will have to apply for a different category of visa.

Peru typically grants tourists either 90 days or 183 days upon arrival (they typically only grant 183 days if you ask, and even then it’s not guaranteed).

When I lived in Lima, I stayed out of the country for three months after my 183 days were up, came back in by air and received another 183 days with no issue. I can’t guarantee it will be the same for you, but if you’d like to try this route, I suggest being out of the country for a decent amount of time (ideally, more than a month) and re-entering by air.

I don’t suggest overstaying your tourist visa. You could be hit with big fines and/or have trouble re-entering the country at a future date.

It’s a particularly silly option if the country you’re staying in doesn’t have calendar year restrictions and allows you to border hop and come back.

No point in playing it dodgy when it’s so easy to renew a tourist visa.

But what about those pesky, aforementioned countries that limit you to a certain number of days per calendar year?

Brazil recently increased its overstay fine to a whopping minimum of 100 reals per day (about $28 USD). Now, it’s been said that you don’t necessarily have to pay this fine – you can opt to have the number of days you’ve overstayed deducted from your stay the next time you enter Brazil (e.g. if you overstayed 30 days, they’ll only give you 60 upon arrival as opposed to the typical 90).

But I wouldn’t risk this. A MINIMUM $28 USD/day overstay fine is no joke. Maybe they’ll charge you 5 times that amount and demand you pay. You just never know. They can. In short, it’s a huge risk by opting to overstay in Brazil.

While not as strict as Brazil, Colombia still does not look kindly on those who overstay. Folks that overstay have reported being fined over $100 USD (it’s completely arbitrary how much they decide to fine you), and folks who have overstayed more than once have reported getting questioned at the border upon re-entry and/or only receiving 30 or 60 days as opposed to the typical 90.

So, there are consequences here. I suspect that if you overstay numerous times, you will have trouble re-entering the country, or even face a temporary ban. I would not mess with it.

Ecuador does not like it if you overstay your 90 days. If you do, you’ll be faced with a choice: a 2-year ban from the country or a $772 USD fine (twice the country’s minimum wage). Needless to say, overstaying in Ecuador is not something most people are going to want to do.

Peru is about the only country in this category where it makes sense to overstay. The fine is currently 4.15 soles (or $1.25 USD) per day, and those who have overstayed rarely report any trouble re-entering the country at a later date. With its border hopping laws being so vague, overstaying may end up being a cheaper option than border hopping if you plan on staying in Peru longterm.

That said, Peru is slowing cracking down on tourists who stay longer than they’re supposed to (they are steadily raising the overstay fee and steadily making it more difficult for tourists who border hop…five years ago, there were no restrictions on border hopping and the overstay fine was lower. Take from that what you will).

Even though some countries are stricter than others, on the whole, visa policies in Latin America are a lot more lax than other regions of the world (Asia, for instance).

This means there are a number of ways to live in Latin America year-round on only a tourist visa, without breaking any laws.

Here are some options that I’d consider

Since the other countries I listed allow you to border hop, you can be more flexible. Go home to visit your family for a few weeks and come back, or check out another country for a week or two.

Of course, there are other ways to structure things. I’ve often thought that 6 Months in Mexico and 6 months in Colombia or Brazil would be ideal for my tastes.

If Mexico ever decides to crack down on its tourist visa, you can bet that’s what I’ll be doing!

Latin American Countries You Can Live In By Border Hopping

Countries That Don’t Allow Border Hopping (i.e they only allow you to stay a certain number of days/year)

Fortunately for you, there is a lot of flexibility here!

At the end of the day, how you choose to go about your “Latin Life” within these parameters is up to you!

We simply wanted to show you that it’s possible to live in Latin America for as long as you want on only a tourist visa!

Cheers. And thanks for listening.