A Few Thoughts About Choosing A Latin American City 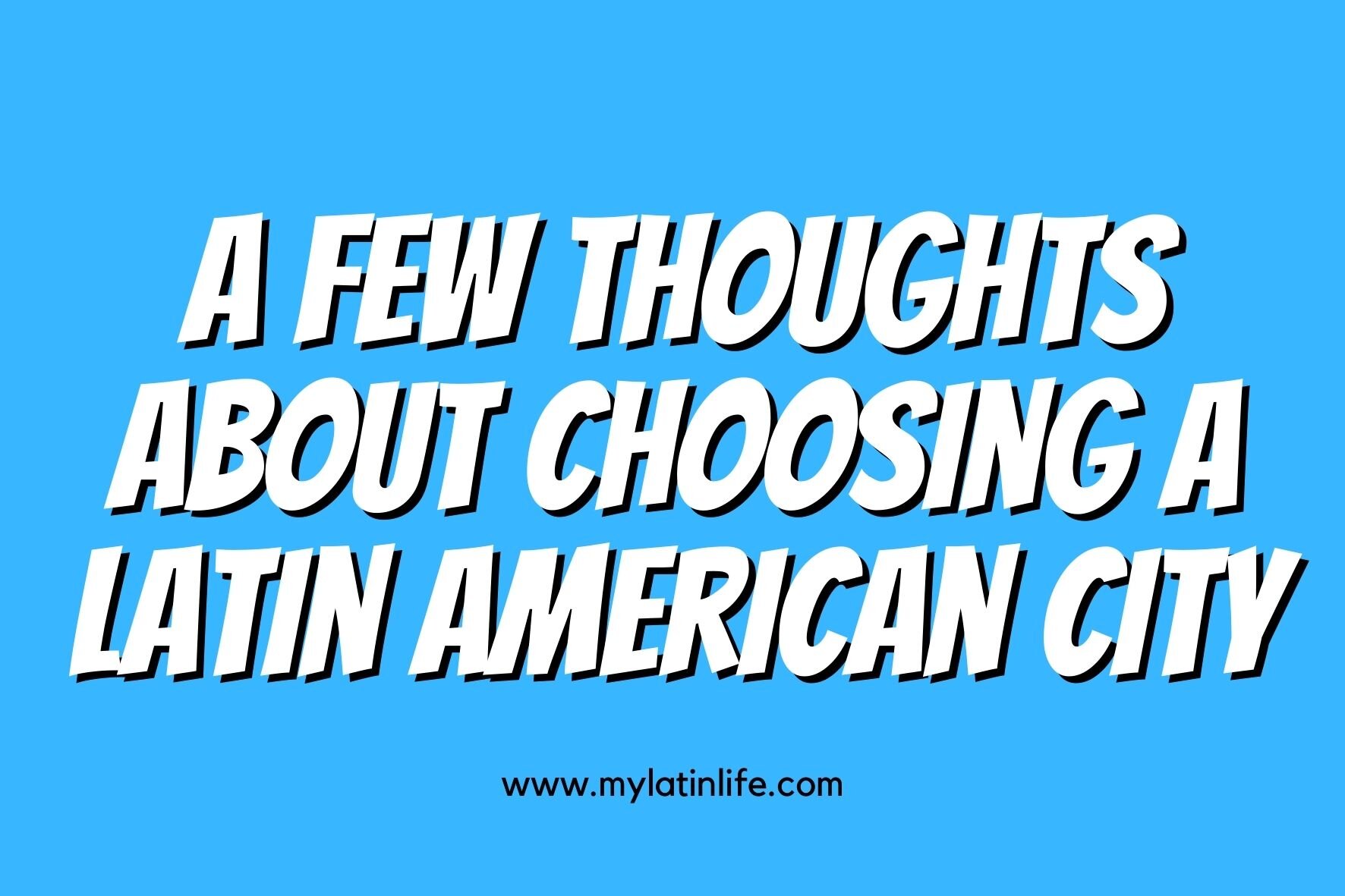 Recently, something happened that made me seriously reconsider the way I’ve been looking at cities in Latin America.

Well, not just one thing…we’re not talking some sort of epiphany.

It wasn’t that sexy.

But, after chatting various times with an American friend in Mexico City who tends to evaluate cities by different metrics than myself (we both like Mexico City, but for different reasons), I realized I might have to adjust my approach when it comes to suggesting Latin American cities to others.

For instance, my main gripe with Lima was that, although they had 3 or 4 neighbourhoods that were among the nicest I’ve seen in Latin America, I found the rest of city quite ugly/unpleasant.

And these uglier and unpleasant neighbourhoods were places I visited on a weekly basis due to…lifestyle choices.

For my friend, this wouldn’t be an issue because, realistically, he’s not going to go out of his way visit those ‘other’ barrios, and neither is the average tourist or digital nomad. In essence, such places would never play a role when they get asked “so, how was x city?”

In my experience, most long-term travellers or digital nomads — unless it’s to visit a tourist attraction for the day — usually spend most of their time in 1 to 3 neighbourhoods.

So, based on that, it would make more sense for me to provide neighbourhood-based recommendations as opposed to city-wide evaluations, right?

Why I Don’t Write Neighbourhood-Based Recommendations

I’ve found that the people who stumble upon my website are looking for more general information.

Historically, a lot of the emails I’ve received go like this:

(what kind of experience they are looking for)

Basically, these folks are just looking for a bit of guidance. They want to make an educated decision on what country in Latin America might suit them best.

If I were to give these people a list of the best neighbourhoods in cities that are potentially good fits, their eyes would probably glaze over. Way too much information for their needs!

Gotta cover the macro before you get into the micro.

As much as I write about whatever my little heart desires on this site, I do also consider what questions I get asked the most, and write topics based around that.

Hence, why I take the broader view of covering countries/cities as opposed to neighbourhoods.

Another reason I don’t tend to give neighbourhood recommendations is that a lot of the more upper class neighbourhoods in Latin America are, well, pretty much the same.

I’m not sure I could say too much that would adequately distinguish Polanco in Mexico City, from Miraflores in Lima from Chapinero in Bogota. They all have nice shops, they have all nice restaurants and they all have nightlife. They all kind of look like American cities. They’re all relatively safe.

In my opinion, the real test of whether or not you connect with a city comes when you expand your horizons to unfamiliar neighbourhoods. How’s the vibe? Do you feel drained or energized? Curious or frustrated?

It’s an intangible thing, but you ultimately have to go with your gut.

In addition, there are also just so many damn variables to consider when recommending neighbourhoods!

For instance, if you’re interested in checking out museums and art galleries for a week in Mexico City, I’d say stay in Centro. If you’re interested in checking out markets and staying in a more typical middle class Mexican neighbourhood, I might say Coyoacan. If luxury shopping and high-end apartments and hotels are your thing, I might direct you to Polanco. If you’re young, hip, hang out in coffee shops and book stores and want to hit the bars and clubs, I might say Roma or Condesa.

If you’re a digital nomad and you’re looking to base up in a city for a few months or more, different story again.

In that case, your priorities will likely be a safe neighbourhood in close proximity to a grocery market, gym, laundromat and transportation systems. An affordable apartment rental may also be high on your priority list.

I know I can’t please ‘em all, so I do a broad city evaluation based on what I see and experience, and based on my own personal tastes and preferences, and leave to you to make an judgement about whether might enjoy the city or not.

To do this in the context of this website, you’ll have to do a bit of inferring.

First, you’ll have to compare yourself to me (the horror!), see how alike you think we are and then go from there.

The Value Of Neighbourhood-Based Assessments

Now, just because I don’t do ‘em, doesn’t mean they aren’t valuable!

Neighbourhood-based assessments are perfect for prospective travellers who:

So, if you’re cocksure about where you want to go, it’s a big city, and you have a plan to stay there for a long time, hit up Google, search for “Best Neighbourhoods in X” (or whatever) and let that search engine do its magic!

My Problem With Neighbourhood-Based Assessments

Thing is, just about every big city in Latin America has “fancy” and “hipster” neighbourhoods.

And, of course, they all have their affluent suburbs, middle class neighbourhoods and poor barrios.

Even cities you might think of as underdeveloped by Latin American standards have their hip and ritzy areas (like Guatemala City: Zona 4 is its hipster neighbourhood, and Zona 10 is its fancy neighbourhood).

And, across Latin American cities, you’ll find these types of neighbourhoods (i.e. the neighbourhoods where tourists tend to stay) aren’t all that distinguishable from one another.

Although you could, I don’t suggest holing yourself up in one or two neighbourhoods if you’re going to be in a city any notable amount of time.

Two, whether you intend to or not, you may find yourself having to leave that neighbourhood for various reasons during a longterm stay.

At least, that’s been my experience.

Since you can find enclaves in any given major Latin American city, the difference-maker becomes whether or not you can handle what’s outside the bubble.

So, it’s best you don’t mind the other 85% of the city, or, if nothing else, you find it tolerable.

I’m a simple man. Probably too simple. I say once you discern if a neighbourhood is safe, quiet enough for you, has everything you need and you like the look of it, try it out!

What becomes more important for a longterm stay is the city as a whole. Is there enough nightlife/restaurants/cafes for you? Do you like the culture/the people? Do you not fear for your safety? Can you get around somewhat efficiently? Does the local food agree with you?

Narrow down a country (or two, or three).

Read as much as you can about Latin American countries and cultures, and take note of the ones that you most identify with.

Next, look into various cities in those countries or country (my site can help with that). Once you’ve got a few in mind, check out more city-specific websites. Those tend to get into neighbourhoods a bit more.

In other words, if you haven’t pegged down a city in Latin America where you want to live, read my site to help decide. Then move on to a city-specific website that’s likely to get into details like local neighbourhoods, restaurants etc. Medellin Guru is an example of an excellent city-specific website.

…and, just to be clear, I’m not saying that city reviews are better than neighbourhood reviews. Not at all!

Ideally, a blogger (such as myself) would do both.

But who’s got time for that!

Just another way to think about the best way to choose a Latin American city.