What Country Should You Visit On Your First Trip To Latin America? 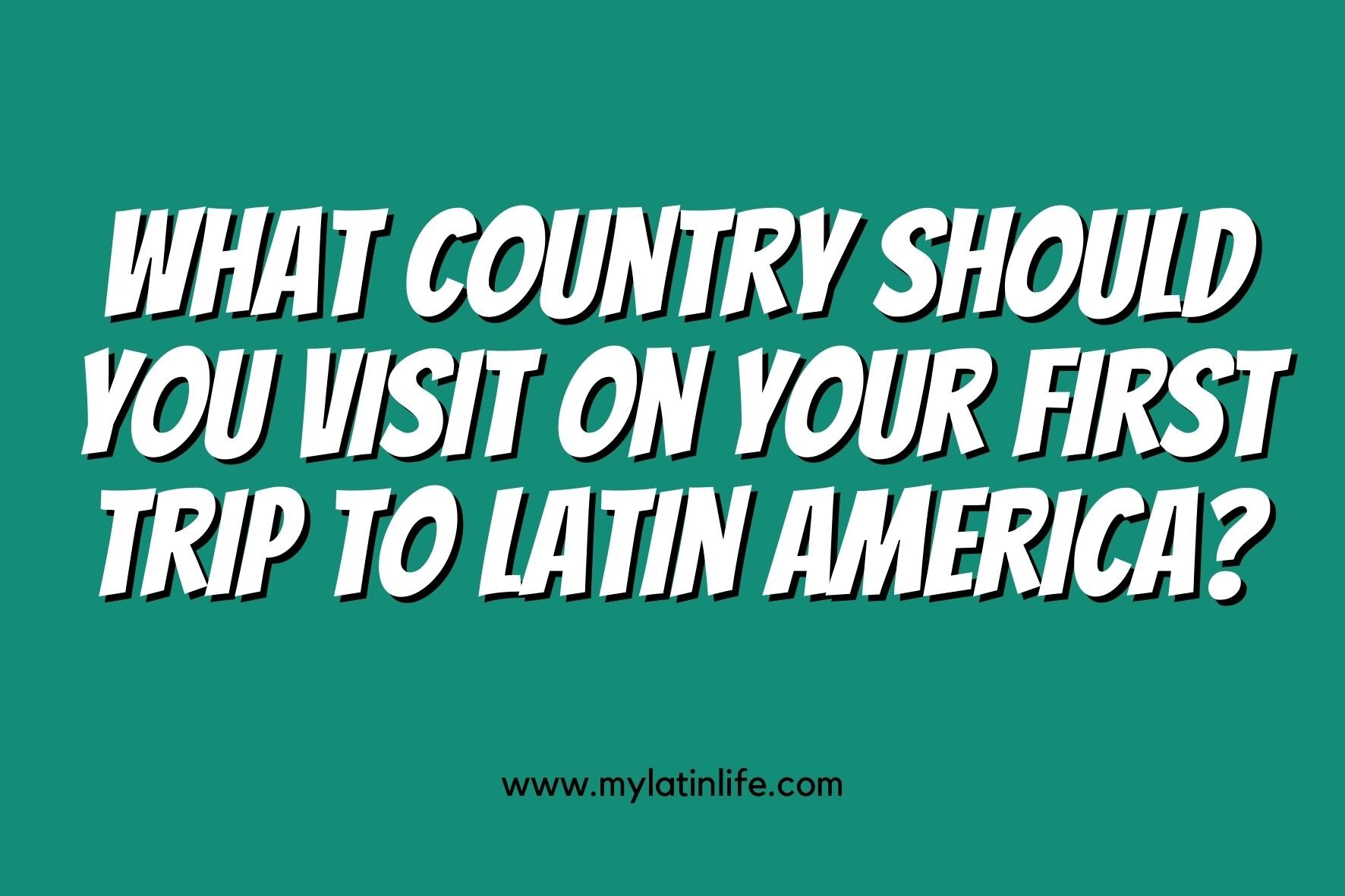 If there’s a type of email I receive more than most, it’s this:

Vance! It’ll be my first time in Latin America. I’m trying to decide what country to visit etc etc etc?

With travel looking like it’s going to rev up again soon (fingers crossed), I’m going to try to address this question the best I can.

Try, because, as you’ll soon discover, there really is no correct answer!

Why This Isn’t (Really) A Stupid Question

I won’t lie: I used to get this question and roll my eyes.

Just go where you’re most interested in, I’d think to myself. How can me — a stranger — help you with this highly personal decision?

My folly was that I’d forgotten what it was like to be a first time traveller — I’ve been in the region so long it can be hard to relate to people who haven’t.

I’ve since recalibrated. I thought back on what it was like the first time I’d travelled Latin America, and it hit me that I could have benefitted from some guidance. Indeed, there were countries I most certainly could have skipped if only I’d known more information about them.

Hell, if I were to travel to Asia tomorrow, I’d probably be asking the same question.

So, if you’re hesitant to ask because you think this is a stupid inquiry, just know that it’s not.

There’s a tendency to think that all Latin American countries are virtually the same, one big Mexico cascading down the southern hemisphere.

Well, not really — I hold the somewhat controversial opinion that many cultural traits remain more or less consistent across Latin America…but, alas, even my vast capacity for stereotyping has limits…

Fact of the matter is, yes, each country is indeed different in its ways and some will suit you much better than others.

Let’s go about figuring out what country might be best for you personally.

First Thing To Do! Identify Your Goals…And Be Honest!

Before asking which country you should visit, you need to identify what you’re looking for when you arrive.

The point is this: know what you want!

Whether that happens to be going crazy at the bar or visiting church tours in a charming colonial town.

What are your priorities in terms of sights, activities and experiences in Latin America? Write all that sh*t down on a big piece of paper!

Next, try to match your goals and interests to a country.

What I’ve found is that most people already have a country in mind that they’re leaning toward…even if they only have a cursory knowledge of Latin America and its nations.

This seems to be the way it is. Maybe they once saw a television show from the country. Or, met someone in their personal life from a particular place. Perhaps they had a friend who went somewhere and sang its praises.

It doesn’t matter how the seed got planted.

Identify these countries and do some Internet research. Forums, blogs, whatever. If you like surfing, type “surfing in X” into Google (or, better yet in a lot of cases, YouTube), and see if it tickles your fancy.

Same with hiking, food tours, historical attractions…whatever it is you’re into.

If you’re into dating, do the same (Internet forums are probably the best for this) and see what the dating scene is like in these countries.

Alternatively, you can sign up for Latin American Cupid or one of its country-specific sites and communicate with women in any given country first hand.

Several “where should I go?” emails I receive are essentially folks wanting to experience Latin America in a safe, stressless manner, while still getting off the beaten path a little.

In other words, they don’t want to throw themselves into a Caracas slum, but nor do they want to be surrounded by guitar playing gringos in hostels: they want a happy medium.

The good news is that there is a misconception that, in Latin America, you’re either on the tourist trail or in the ghetto.

If you’re looking to get off the gringo trail while still keeping things safe and sound, there are plenty of options.

In my days of frequent travel, I used to do what I’m going to call “mid-sized city hopping”. Basically, I’d travel to midsized cities rather than major metropolises or touristy colonial towns.

For instance, in Mexico, if you travel to Leon, Queretaro or Merida, you still have all the amenities, activities and nightlife or a bigger city or a gringo tourist trap, but with far less tourists. It’s a good way to get a taste of the local culture without things getting too overwhelming or dangerous.

In addition to the above Mexican cities, here are some good destinations for that kind of thing.

Right, although where one should go on their first trip to Latin America is entirely subjective, I have found that there are a few countries that I get asked about more than others.

This makes sense because, let’s be honest, some Latin American countries are just more appealing than others for a variety of reasons.

Not to single any countries out but to throw out a few random examples:

Also, keep in mind that I talk mostly about major cities on this website, so by and large the queries are related to going to metropolises as opposed to say, beach getaways in Panama or jungle canopies in Costa Rica. I’m also pretty light on my Brazil content, so I don’t get a lot of action from Brazil-oriented travelers

This just so happens to more or less line up with the countries I personally think are the best fit for a first time traveler to Latin America.

Here’s why I think these countries are a good fit.

Since its drug war troubles throughout the 90s, Colombia rebounded hard, and is now arguably the number 1. go-to spot in South America. It’s cheap, has great weather, cafes, nightlife, and adequate infrastructure. It’s touted as a “cool” destination by digital nomads, and Medellin has far and away become the most popular “location independent” destination in Latin America, thanks to thousands upon thousands of online articles singing its praises.

Most foreigners I’ve met in Latin America have done a stint in Medellin.

Based on colloquial evidence, it’s by far the most visited places of digital nomad types in Latin America between the ages of 20-40.

Now, I don’t agree that Colombia is an ideal country for first time travellers. It’s not for beginners. Especially not for beginners who like to party. It’s easy to get in trouble in Colombia. It is not the safest Latin American country by any means.

But, alas, it is one of the most fun if you’re into nightlife.

Mexico is a country of interest because it is familiar. There is a lot of Mexican cultural influence in the United States, and many Americans and Europeans have been to Mexico on vacation.

As a capital city, Mexico City is a good jumping off point. It’s modern and, thanks to the American influence, will feel somewhat familiar for people coming from the United States. It’s also quite safe by Latin American metropolis standards (indeed, the city feels safer than Bogota, Quito or Rio de Janeiro).

It’s also got plenty of charming colonial towns to visit.

Mexico is without a doubt a good country to transition into Latin America.

Ah Peru. It’ll always have a special place in my heart. And it’s an excellent jumping off point for first time travellers to Latin America.

First of all, it’s got Cusco and Machu Picchu. Famous the world over, and definitely worth a look even though both are firmly on the gringo trail.

Then it’s got Lima. In my opinion, Lima is one of the best large cities in Latin America to visit if you’re new to life down here. Although it’s got its rough areas (many of which I had to visit for work purposes during my time living there), it’s also got a handful of the safest and most picturesque neighbourhoods in Latin America (such as Miraflores, Barranco and San Isidro). In these neighbourhoods, life is easy. There are plenty of fine restaurants, great nightlife and English levels are high. If you’re looking to transition into your Latin life, there is almost no better place to do so than Lima.

As the far and away top tourist destination in all of Central America, it’s not surprising that Costa Rica has caught the eye of readers. By all accounts, it’s a fine choice for someone visiting Central America for the first time. It boasts great beaches, high english levels and is one of the safest countries in the region. It’s a good first country to ease your way into Latin American life, so to speak. I would, however, steer clear of the capital San Jose. It’s far from the best of what Costa Rica has to offer, which is its spectacular nature!

But jokes aside, I’ve been asked about Argentina A LOT lately. I suspect word has got out about how cheap it is down there at the moment. Despite its economic woes, the fact that Argentina is one of the safest and most developed South American nations makes it a fine choice for first time travellers. You could definitely do worse than having Buenos Aires as your first Latin American experience.

Unfortunately at the time of writing their borders remained closed to tourists due to Covid, so you’ll have to wait awhile.

If it’s your first time in Latin America and you want a taste of that big city life, in my opinion, the most “manageable” cities will be Medellin, Mexico City, Lima or Buenos Aires.

Watch some YouTube videos, do some Internet research and pick your poison. All these cities have solid infrastructure, good dating scenes, rich cultures and are quite manageable. In other words, you won’t be throwing yourself off the deep end.

I’ve found that most people who ask me this question already more or less know where they want to go, they’re just looking for reinforcement.

But, if you’re really not sure, Mexico, Colombia, Peru, Costa Rica or Argentina seem to tick the boxes for most folks.