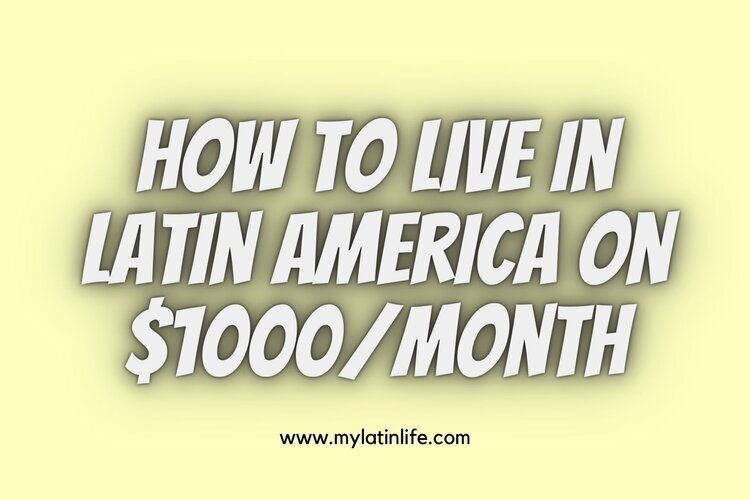 Today I’m going to tell you how to live in Latin America for less than $1000/month.

There’s a share of articles outlining where you can live in Latin America for 3-figures/month (such as This One from South America Living), but these articles fail to tell you what this is actually going to look like in practice.

Luckily ol’ Vance is here to pick up the slack; to lay down the strategies and sacrifices that will make this possible.

Let’s get it going

(all figures are listed in USD).

That Time I Lived on $600/Month in Mexico City

If you’re a frequent reader of the site, you may have heard this story before so bear with me.

When I first moved to Mexico, I rented a tiny apartment in the south of Mexico City. I was earning less than $1000/month online and had very little savings, so I knew if I wanted to make things work, I’d have to live cheaply.

During that month I only went out for drinks one time, I took one taxi, relying on public transit the rest of the time, and most of my meals consisted of bread and cheap vegetables. The couple times I went on dates I arrange for the girl to meet me at a park where’d we’d just walk or go for coffee.

My monthly expenditure came out to about $600 USD…and it would have been less if not for a few bottles of booze I’d allowed myself for some home drinking.

But Vance! That’s well less than $1000/month. I thought you said this wouldn’t be easy!

True. But I’m leaving out one important detail.

That brings me to my first tip.

While it’s indeed possible to live alone in most places in Latin America for under $1000/month, it will be MUCH easier if you’re willing to have a roommate or two.

The obvious reason is the ability to pay less rent, but there are other cost-cutting benefits as well, such as splitting taxi fares if you go somewhere together or buying groceries in larger quantities (many markets for instance will sell fruits or vegetables cheaper if you buy 2kg instead of 1kg).

And another fun fact: since the majority of older apartments in Latin American cities were built to accommodate families (i.e 2 or 3 bedroom flats as opposed to 1 bedroom or studios), you’ll find that there aren’t as many single-person accommodations, and for those that do exist, you’ll pay a (relative) premium.

Ergo, two or more bedroom apartments are usually going to be a better deal.

2) Opt For A Longterm Apartment Rental

To get the best deals on apartment rentals in Latin America, you’ll probably have to rent for 6 months or more.

Most apartment rentals that you’ll find in newspapers, local websites, or on street signs as opposed to on Airbnb or VRBO (where listings are invariably more expensive) will require a 6 month or a year lease.

If you’re dead set on staying in a particular city for over 6 months, definitely seek out local listings as opposed to Airbnb.

However, I realize that isn’t realistic for a lot of people. It’s a big commitment, and if you’ve just arrived to a city you probably want to see if you like it first.

Why a month? Because most Airbnb hosts offer deep monthly discounts (a lot of times around 30% off the daily rate).

Assuming you’re willing to commit to a city for a month (it takes that much time to really discover any city anyway), you’ll be able to save quite a bit of money.

I also suggest living in middle-class neighbourhoods as opposed to wealthy or “hip” neighbourhoods. You’ll find safe neighbourhoods in all Latin American cities that are middle class, and often located a quick bus or taxi ride from a nightlife zone.

Although UBERs and taxis are cheap virtually all over Latin America (you’ll rarely pay more than $10 a trip), these little journeys add up over time.

I know people down here who take Uber EVERYWHERE and have never set foot on a subway or a bus. To each their own, but taking public transportation is one of the easiest ways to save money while living in Latin America.

But, let’s face it: taking public transportation can be miserable, particularly down here. It’s often crowded and claustrophobic.

I tell you some ways to make it more tolerable.

First, I suggest looking for an apartment that is located walking distance from a metro or bus line that will bring you to where you expect you’ll be hanging out the most (for instance, nightlife/restaurant areas or your place of work, if applicable). Avoiding multiple transfers takes much of the headache out of riding a bus or a subway — just zone out until you arrive at your destination!

Second, do your best to arrange your schedule so you don’t end up riding public transit during peak hours when everyone is getting off work, typically from 6-8 pm. You’ll always find me at home working during these hours because f*ck dealing with those crowds!

Third, a little compromise goes a long way. If you’re going out for a night on the town, transit there and Uber back instead of taking an Uber both ways. Or, limit yourself to, say, 4 Uber trips a week. These taxi app expenses are easy to overlook because Uber and the like are relatively cheap, but opting for public transportation from time to time will save you a chunk of change in the long run.

In Latin America, prices at local markets are often far cheaper than what you’d find in a chain supermarket.

Not many foreigners realize how dramatically prices vary by neighbourhood. It makes sense — in the USA, Canada, Australia and Western Europe this doesn’t really happen.

Similarly, if you live close to a big public university, you’ll find plenty of affordable eateries, bars and cafes to cater to the student population.

If you’re looking to live on less than $1000 a month in a big Latin American city, seek out the local markets in middle or lower class areas, and check out the scene near a public university!

If you’re looking to live on under $1000/month in Latin America, some cities are going to be off limits to you.

While you can find locals in every Latin America city — even the most expensive ones — living on less than $1000 a month (oftentimes, much less), as a foreigner, there are some places where this simply will not be realistic.

Unsurprisingly, small cities are almost always cheaper than large metropolises, so if you’re serious about living cheap, opting for a mid-sized city or small town will make things much easier.

Here are some cities where I’d argue that living on less than a grand a month is near impossible without extreme sacrifices:

There are more, but these are the first ones that come to mind.

I’d also say that $1000/month is pretty ambitious (but possible) in:

So, keep this in mind. The good news? This still leaves a ton of cities to choose from!

My Top Countries for the budget-conscious traveler in 2021 would be:

These countries will have a lot of cities to choose from, and you won’t have to sacrifice much on your quality of life. In Colombia’s coffee region for instance, $1000 a month should afford you a decent life

Putting This All Together

Right, so the single most important factor if you want to live in Latin America on under $1000 a month is this:

HOW MUCH YOU’RE PAYING IN RENT

Your rent price is inflexible. The rest? Much of it you can control.

If you don’t want to break 4-figures a month in expenses, I’d say aim to pay $300 or less on rent and utilities. If you manage that, you should be able to live on less than $1000 anywhere in the region using some of the aforementioned tips…which we’ll recap now.

In my opinion, one of the best setups for living cheaply in a big city is residing in a middle-class neighbourhood, close to a public university (for cheap bars/restaurants) and walking distance from a metro line that goes directly to the hip/touristy areas of town.

That’s the gist of it!

That’s about it, folks.

I hope y’all got something out of this.

Again, first and foremost, focus on your rent price. Keep your largest fixed expense low, and you’ll be surprised how cheap it can be to live down here! You can indeed live in Latin America for under $1000 if you follow the advice above!