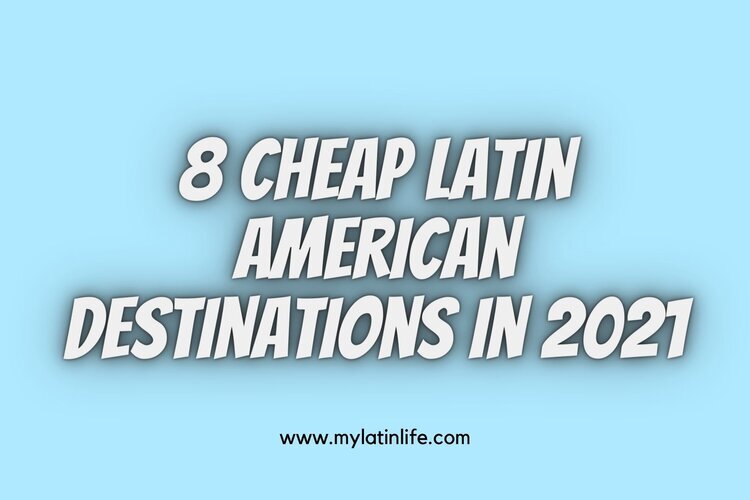 Looking to travel to Latin America on the cheap this year?

Ol’ Vance has got you covered!

But let me set one thing straight: not all budget cities in Latin America are created equal — you’re not going to want to hang around a city that’s dangerous or in the middle of nowhere just to save a bit of money!

Ergo, this list will contain cities that aren’t only cheap, but also, well, liveable.

And here we go!

Nicaragua is a reliably cheap destination — a single man or woman could get by anywhere in this country for under $1000/month. Due to its small size, Nicaragua is also easy to navigate. You can get a bus to any of the country’s major cities in a matter of hours.

Nicaraguans are among the most friendly people I’ve met in all of Latin America.

Specifically, I recommend the colonial towns of Granada and Leon. They’re charming, safe, full of university students, and still not overrun with tourists compared to colonial cities in other countries.

Although the infrastructure of Nicaragua may leave you wanting, if you’re on a tight budget and/or looking to bootstrap an online business while not dipping too much into savings, I’d give Nicaragua serious consideration.

I won’t lie. I’m not the biggest fan of Quito. It felt slightly dangerous, and I didn’t find the people particularly welcoming.

That said, a lot of foreigners (particularly retired expats) love the place.

So, personal bias aside, I can admit that it truly is a beautiful city…and there is good value here. Although you’ll find consumer prices (groceries, clothes, electronics, etc) more expensive than nearby Lima or Bogota, the real bargain in Quito is apartment rental prices.

And, as I’ve said before, if you can get a good price on rent, you can much more easily control other expenditures.

I was recently checking Airbnb listings and I was shocked at the deals!

In Quito, about $500 USD/month will get you a decent-sized one-bedroom or two-bedroom in a good area of town, like near La Floresta or Plaza Foch.

Considering rental prices are cheaper here than Lima or Bogota, this may be a good spot to consider for frugal South America fans that know how to stretch a dollar.

Colombian poet Ricardo Nieto wrote, “I would rather have a hangover in Cali than a party in Bogota.”

There’s no denying that, if it’s a party you’re after, there’s almost no better place in Colombia than Cali. The city boasts beautiful women, lovely weather and friendly locals. Although Cali has always been cheap for a city of its size, in previous years, security was a major concern. I’m happy to say that the city of salsa has since made strides in the right direction — in 2019, its homicide rate dropped by 12%.

It’s also cheaper than Bogota or Medellin. A budget-conscious man or woman can get by in Cali on about $1200/month.

That said, it’s worth noting that Cali is still considered one of Colombia’s more dangerous cities. Take normal safety precautions, such as not walking the streets at night and keeping your phone in your pocket in public and you should be OK.

Beautiful geography, cheap livin’, friendly locals and some of the world’s best coffee!

What more could you want?

Colombia’s coffee triangle is an excellent choice for budget travels in 2021.

If you want bigger cities, take your pick between Manizales, Armenia, or Pereira (I personally recommend Manizales, but if you don’t like rain or cold-ish weather, opt for Pereira). Or, if small towns are your sort of thing, take a look at Salento — although it’s a bit more touristy, prices remain reasonable.

Mexico is a great destination to save a few bucks. The dollar continues to get stronger against the peso, and, based on Mexico’s economic outlook, that’s not likely to change next year.

Skip the traditional Cancun beach vacation and head to the heart of Mexico: the Bajio. Smack dab in the center of the country, the Bajio offers a wide selection of great cities at a low cost.

I recommend checking out the cities of Guanajuato and Queretaro, where you can find something to rent for about $400 USD/month.

A CONTROVERSIAL choice, particularly so high up the list.

However, I stand by it.

You’ve probably heard something or other about Acapulco’s security situation. In fact, it was ranked The Second Most Dangerous City In The World this year.

But hear me out…

This violence is mostly confined to certain neighbourhoods and takes place among those that are involved in the drug trade. As a tourist, you’re not likely to notice anything sinister.

Still, due to its sordid reputation, foreign tourists are steering clear of Acapulco. This means there are great deals to be had on lodging, restaurants and nightlife.

More importantly, you’d be helping small businesses and local vendors who count on tourism for their livelihood.

If you’re bold enough to not be scared off by sensationalist news reports, I’d (counterintuitively) argue that 2021 is the best time to head to Acapulco.

A few short years ago, I never imagined that I’d be putting Argentina on a cheap Latin America travel list.

But here we are!

If you’ve not heard, the Argentine peso has devalued dramatically.

And I do mean dramatically.

Here’s a graph displaying the peso against the US dollar over the past five years:

Cordoba is an excellent choice. A young population, the food/party scene is among the best in the country and the city is safe and charming — lots of parks and cultural attractions. Don’t wait for inflation to skyrocket! Go now! Seriously, who knows when this country will be this cheap again.

It’s really a no-brainer that this is THE place to go in 2021 for budget travelers with a bend toward Latin America.

In Buenos Aires, you’ll get first world infrastructure, rich culture, amazing food and vibrant nightlife for a fraction the price that it’s been in the past.

Not to mention extremely beautiful women.

If you’ve ever considered visiting Buenos Aires but have put it off for whatever reason, this is your year.

And there you have it, folks!

A handful of cities you can consider for your travel plans this year.