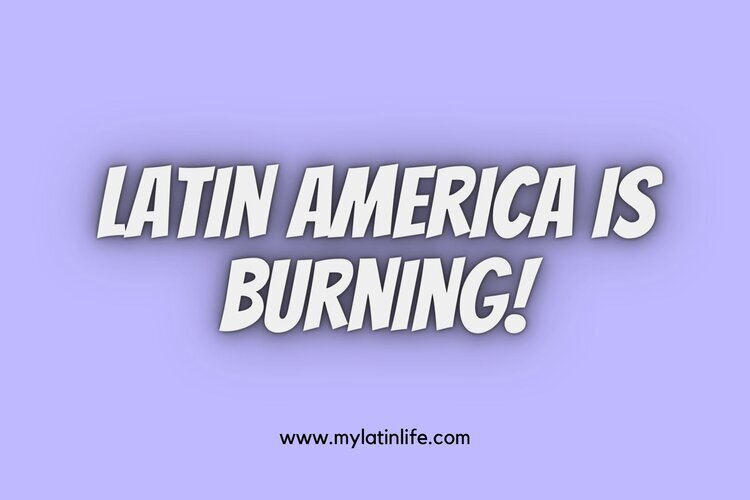 Protests are RAGING across Latin America.

And I’m here to tell you what’s happening!

We’ll cover the discontent in Ecuador, Chile, Bolivia and, most recently, Colombia.

To properly understand the protests in Ecuador you have to think about Rafael Correa, the country’s previous president.

Basically, president Correa was a left-wing fella who received a bunch of loans from China. He used some of this money for good, like building better roads and improving the standard of living for Ecuador’s poor.

It helped that Ecuador’s economy was good during this time — much like Lula in Brazil, Correa in Ecuador was benefitting from a big commodity boom during which China was hungry for raw materials.

But (again, like in Brazil) the boom ended, and around about 2014 things started to go downhill.

Correa’s subsequent attempt to seize more power in a dictator-sort-of-way, sealed his fate. He was run out of office and a new guy was elected: Lenín Moreno

The country that Moreno inherited wasn’t in great economic condition. Thanks to Correa’s epic spending, Ecuador owed a lot of money to China, money it simply didn’t have.

Correa found himself in a bit of a pickle. Ecuador was about $60 billion in debt and bleeding about an addition $10 billion each year.

So, what do Latin American countries do when they need money?

They go to the IMF!

Moreno and the IMF pounded out a loan agreement. Part of that agreement was to get rid of the country’s fuel subsidies that had been in place for about the last 30 years.

Overnight, gas prices shot up, other fuel prices raised about 30%, and a lot of people were pissed off.

This was particularly unappreciated by the country’s indigenous population, many of which live below the poverty line.

You can guess what happened next!

Ecuadorians took to the streets and things got ugly fast. There were heavy clashes between the police and the protesters. Moreno thought he could wait it out…but nah — each day the protests grew stronger and more intense.

Eventually, Moreno backed down and said right, OK, you can have your fuel subsidies again.

Protests have since subsided.

Well, folks are still mad at Moreno. But Ecuador is still in crippling debt, and the longer it puts off paying, the more severe the future economic consequences will be.

I wouldn’t bet on another “Ecuador boom” like what happened under Correa anytime soon.

The 2019 Chilean protest started somewhat spontaneously. Basically, there was a fare hike on subway and bus fares.

If you’re from a first world country, you’d consider this fare increase to be inconsequential (4%, or $0.04).

But, this fare hiked was framed as “the straw that broke the camel’s back.”

In other words, rather than directly protesting a fare hike, it was more of a trigger to take to the streets for a number of other dissatisfactions, such as rising cost of living, inequality and privatization.

It all started with secondary school students of all people. They started hopping the turnstiles in metro stations as a way to protest the fare increase. This quickly escalated into a full-on takeover and occupation of various metro stations, the looting of shops and the burning of buildings.

By some accounts, on October 25th, the protest grew to 1 million people.

In total, around 81 stations bus or train stations were damaged and 17 were burned down.

Not at all what you would call a peaceful protest!

On October 28, Sebastián Piñera, the president of Chile, made a compromise. He said, OK we’ll change the constitution. We’re going to hold a referendum in April and try to sort this all out.

However, Piñera’s announcement caused the Chilean peso to sink. Social unrest is never a good look for investors, after all, and no one knows what this new constitution will look like, or what impact it will have on the Chilean economy.

The protests in Bolivia were in response to reported electoral fraud in the recent general elections.

Again, we gotta go back in time a little bit to understand what happened here.

The 2009 Bolivian constitution declared that a president could only be elected for 2 terms in order to prevent this ‘president for life’ thing that historically has been fashionable in this part of the world.

In 2016, the president of Bolivia, Evo Morales, tried to change this by holding a vote that would allow him to run indefinitely.

The Bolivian people rightfully rejected this.

The Supreme Tribunal of Justice later ruled that all public offices could run for however long they wanted, despite the constitution saying otherwise.

Things were starting to look a bit dictator-ish.

So, the general elections this year were a bit tense. Many expected Morales to steal the vote, which it looked like he did (although not by huge numbers — he was still popular among many of Bolivia’s citizens).

Foreign governments audited the election and found abnormalities, and requested that another election be held.

Although Morales agreed to holding new elections, the Bolivian public wasn’t having it. They took to the streets, and many police forces changed to the side of the protestors. Morales saw things weren’t looking good, hopped on a plane and headed to Mexico, where the Mexican president had offered him asylum.

Since, the Bolivian congress has approved new elections.

Initially, the protests in Colombia were meant to be nothing more than a labour union strike, but other folks caught the fever, including students, pensioners, indigenous groups and other members of the population, and turned things into a nation-wide demonstration.

A lot of people in Colombia are upset with president Duque because his government failed to sufficiently implement the 2016 peace deal between the government and the FARC, a failture that many claim is responsible for the increase of murders of indigenous leaders.

President Duque said he was open to dialogue and met with representatives of the protest. However, they left unsatisfied, saying their demands had not been met.

As of now, the protests are still going strong.

There are many who believe these protests are not organic, but rather ‘coup’ or ‘destabilization’ efforts coming from both sides of the political spectrum.

In the case of Ecuador, Chile and Colombia, some folks believe that the latest protests were a left-wing subversion attempt to destabilize the region. Indeed, Ecuador is looking into an unusual influx of Cubans to the country that occurred just prior to the protests. Additional suspicious have been levied at the Puebla Group, a group of left-wing current and former Latin American political leaders that meet to propose ‘alternatives’ to neoliberalism.

As for Bolivia, many are calling it a good old fashioned US-backed coup.

What Do I Think?

I’ll admit, I can be a sucker for conspiracies. And it’s certainly possible that nefarious agents had a hand in the recent events across Latin America.

However, I’m not sold.

In the case of Ecuador, such a dramatic fuel hike is probably enough to provoke mass protests. And, aside from that influx of Cubans thing I just mentioned, I don’t have much reason to suspect outside actors.

I am, however, a bit more suspicious about Chile and Colombia. From an economic standpoint, the two countries ain’t doing too bad (relative to the region). And, there wasn’t really a notable ‘event’ such as an election or dramatic and instant increase in cost of living to spark this (unless you count a four cent bus fare hike, which I don’t. Fares have to increase and do increase all around Latin America without people destroying their respective capital cities).

Maybe there was a Bolivarian helping hand 😉.

I also have my doubts about Bolivia. Things seemed too well organized. The swiftness in which they ousted Morelos from power and established an interim leader was…impressive.

However, if that was indeed a right wing coup in Bolivia, the United States couldn’t have had much to do with it because, like I said: too well organized.

But, at the end of the day, who really knows.

It’s possible that the nations of Latin America have realized that things aren’t great, never really have been and aren’t likely to get better. Maybe the other countries saw what happened in Ecuador and thought “yeah, we’re mad about things too” and decided to take action.

Perhaps it was all organic.

What do you think?