Men’s Fashion In Latin America: How Should You Dress? 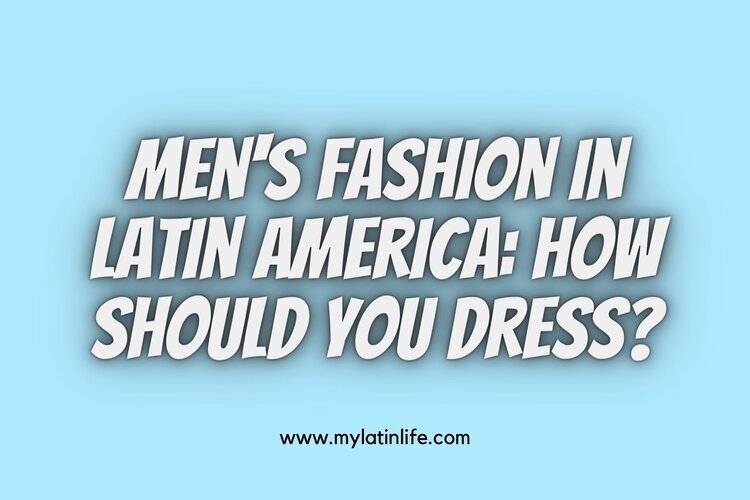 Awhile back, two friends from Canada came to visit me in Mexico City.

It was their first night in town and they were after some fun and some women.

“Let me get ready,” I reply, expecting them to do the same.

After a few minutes, I exit my room, surprised to see them wearing the same things as when I entered.

“…you guys going to change your clothes?” I ask

“Isn’t this good?” The other one says.

I observe them. One is wearing an Under Armour shirt and Under Armour shoes, with jeans two sizes too big. The other is sporting Cargo shorts and donning a teeshirt with some metal band on it.

“Jesus,” I mutter under my breath.

I almost damn near went back in my room, slammed my door and wrote this post right then.

But, better late than never.

What my friends failed to acknowledge was that a man doesn’t get women in Latin America just on account of being White.

A man doesn’t even get into a club down here just on account of being White.

Girls in Latin America (like anywhere else) have tastes that are slightly more refined and nuanced than skin colour. How you look matters. As much, if not more, as how you speak and conduct yourself.

And — although it was their intended focus for the evening — it’s not all for the ladies!

If you’re dressed acceptably, men will also give you more respect. Doormen will let you in without as much hassle; bartenders will serve you faster.

Now, I’m no fashion guru. But after spending a great deal of time in Mexico, Central and South America, I’ve discovered ways to tailor my style in a manner that allows me to look good and stand out from the locals, while avoiding the risk of being robbed due to ostentatiousness. A harsh fact about life down here is that you can’t just wear whatever you want without increasing your chance of being a target for thieves.

With that in mind, here’s how you should dress to impress in Latin America:

This should be obvious, but apparently it’s not. The amount of foreigners in South America shorts and lame teeshirts is nothing short of extraordinary. Guys, leave this stuff at home. Nothing dries a woman up faster than when the bottom half of your body looks like you’ve just returned from an African safari, and the top half looks just you’ve just got out from your high school gym class. If you’re hiking in the Andes away from civilization, fine – wear what you want. But if you’re in public have the common decency to dress like an adult.

An easy rule to follow: don’t buy shirts with logos or graphics – no obnoxious branding allowed!

While wandering the city, you’re going to want to keep things basic. This is for two reasons. The first is that you want to be comfortable, especially if you’re in a warm city. The second is you want to avoid looking wealthy to lower your chances of being victimized.

But simple doesn’t have to mean ugly.

Rule number one about looking good is making sure your clothes fit properly. Unless you’re tremendously overweight, you can make a $5 tee-shirt from Wal-Mart look good if the fit is on point.

When exploring unfamiliar streets, my go to is a white, black or grey shirt. V-neck or crew, whatever happens to be clean. A lot of people are against crew neck tee-shirts but I’m not that picky – crew necks look good too if they fit.

Also, take the time to make sure your pants fit, jeans or otherwise. The waist should fit so you don’t need a belt to hold them up, and the pant legs shouldn’t pool at the ankle. They should have a half/full break. Tailors are cheap down here so you can fix that up in a heartbeat if your jeans are too long.

Simple but well-fitting clothes that match well will have locals thinking “that guy looks good…but he probably isn’t worth robbing.”

Women notice shoes. They are an extremely important part of a man’s wardrobe. This is also an area where you can really capitalize on the ineptness of foreigners in South America. Leave the runners and flip-flops at home (unless you’re at the beach or at a Brazilian funk party) and get yourself a simple pair of boots and/or stylish plain shoes for everyday use.

Here you can get a bit more creative. Dressing well in a bar or club will put you ahead of 99% of both the foreign and local competition without even having to open your mouth. You don’t have to look like a dandy, but you will want to stand out in some manner. Pick up a cheap blazer from H&M, a pocket square and a collared shirt and you can end up with something like this for less than $100. He could’ve done better on the undershirt (either don’t wear one or make sure it isn’t visible) and pocket square, but you get the idea. Even the photo below will be more than enough to turn heads down here.

For shoes, something like these will suffice. Just make sure they pair well with what you’re wearing. You can pick up cheap pairs along these lines at Aldo if you don’t want to break the bank (but they’ll wear out quick).

5: Pick clothes that are congruent with your personality

Above all, you’re going to want to wear clothes that match your personality. For example, I’m a low-key guy so I could never get away with a pink suit and alligator shoes. There would be too much of a disconnect between my personality and my look. I wouldn’t be calibrated, and people would get confused once they met me.

If you’re a high-energy guy and extremely outgoing, you’re more likely to pull off a more extravagant look. If you’re not, don’t force it.

Another thing to note. If you have darker hair but lighter skin (like me), avoid light, pastel colors when choosing clothes. You’ll look pale and washed out. It took me awhile to sort out why I looked off in my favourite light green and light red tee, but this was why. If you have a complexion similar to mine, stick to bolder colors like dark blue, dark brown, dark green, maroon etc. White, black and grey are fine, too.

My personal, everyday style both in South America and at home can best be described as “Daniel Craig in Layer Cake:”

Basically, when in doubt, just keep things simple. The most important thing is dialling in the fit of your clothes. Like I said earlier, even a cheap Walmart t-shirt can look good if you’re wearing right.

Another great thing about Latin America is that tailors are very cheap — if you have a pair of jeans that are too long and sagging over your shoes, there’s no need to buy a new pair, simply get them hemmed down here. It’ll cost you less than $10.

And that’s about all, guys. Stand out from the gringo crowd down here. It’ll do you well. No graphic tees, no khaki shorts, no sandals, and you’ll already be 90% ahead of the competition.