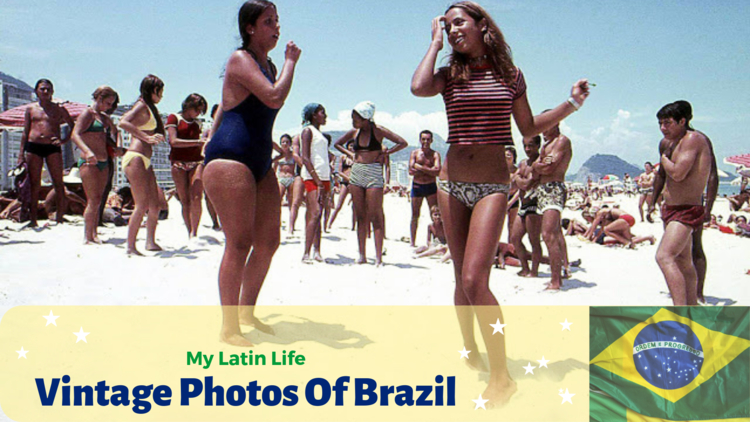 Brazil is alluring, is it not?

Ok, that last one isn’t much to boast about, but nevertheless, there is no questioning the fact that Brazil is a country that oozes “cool.”

And, as you’ll see from the following photos, it appears it’s always been that way!

For my latest photo collection, we’re heading south to the Terra do Brasil for some sexy snapshots from the 60s, 70s and 80s!

But first, I’m going to give you a brief history of the country. Because, you know, no ice cream until you finish your dinner.

A Brief History Of Brazil

Little is known about Brazil’s first indigenous tribes, who inhabited the country about 10,000 years ago. No written records were left. The extent to what is known of them is that they were nomadic hunter-gatherers.

Year 1500. The first Portuguese make contact with Brazil and name it for Portugal. Diplomat Pedro Álvares Cabral is on his way to India, but his ship drifts way off course across the Atlantic and he lands in Brazil.

Upon arrival, the Portuguese waste no time and get straight to colonizing.

The Portuguese begin selling off large tracts of land to plantation owners to encourage colonists, establishing sugar plantations and basing the economy on sugar cultivation.

However, there’s a problem.

There aren’t enough Portuguese to emigrate to the new world as labour.

The Portuguese try to enslave natives, but most of them die because the work is so intensive and the climate so harsh.

So, the Portuguese bring in slaves from Africa, mostly Angola.

Slavery in Brazil is much worse than slavery in USA.

In fact, 10 times as many slaves are brought to Brazil than to the USA.

In Brazil, the life expectancy of slaves is only 6 or 7 years. Due to its proximity to Africa, it is cheaper to let them die and just bring more in than it is to bring women over, which would make it possible for slaves to start families.

This is part of the reason race mixing becomes more common in Brazil than in the USA.

King Joao packs it in and heads back to Portugal, and his son Pedro is named regent of Brazil.

Pedro goes against Portugal and declares Brazil an independent empire, and himself as emperor.

Like his father, Pedro eventually goes back to Portugal and Pedro’s son (Pedro II) begins ruling. To this day, Pedro II is regarded as one of Brazil’s best rulers. His daughter Princess Isabel ends slavery in 1888. Pedro II attempts to establish a parliament but is overthrown by a military coup, despite having widespread support of the Brazilian population.

This ushers in a quasi republic government known as the Brazilian Old Republic.

Intermitted dictatorships, corruptions and elitism mark this time in Brazil’s history, but a strong economy allows for some development.

In 1930, Getúlio Vargas a populist and nationalist leader ascends to power in a military coup. During his time in office, Vargas creates a strong police state based on nationalism, but is also a champion of the poor. He helps them out with social services.

In 1945 his leadership ends in another military coup.

Vargas is later elected president in 1951, but eventually commits suicide.

The next elected president, Juscelino Kubitschek, moves the capital from Rio de Janeiro to the middle of nowhere (Brasilia). Industry continues to develop.

Later, Humberto Castello Branco marks the first of five generals to lead Brazil in a military dictatorship. This series of dictatorships (or, military rule, depending on how you want to phrase it…there is some debate in regards to the appropriate way to term this) lasts until 1988, when Brazil holds its first free elections in 30 years.

Since, Brazil has been plagued by corruption and high rates of crime.

Even its once-beloved president Lulu is now in jail for corruption.

With newly-elected Jair Bolsonaro, many Brazilians hope to see a Brazil of law and order and one unmarked by corruption.

Now for some photos.

Want to continue your vintage kick? Here are 23 incredible vintage photos of Mexico!