My Latin Life’s Weekend Getaway To Taxco and Tepoztlan 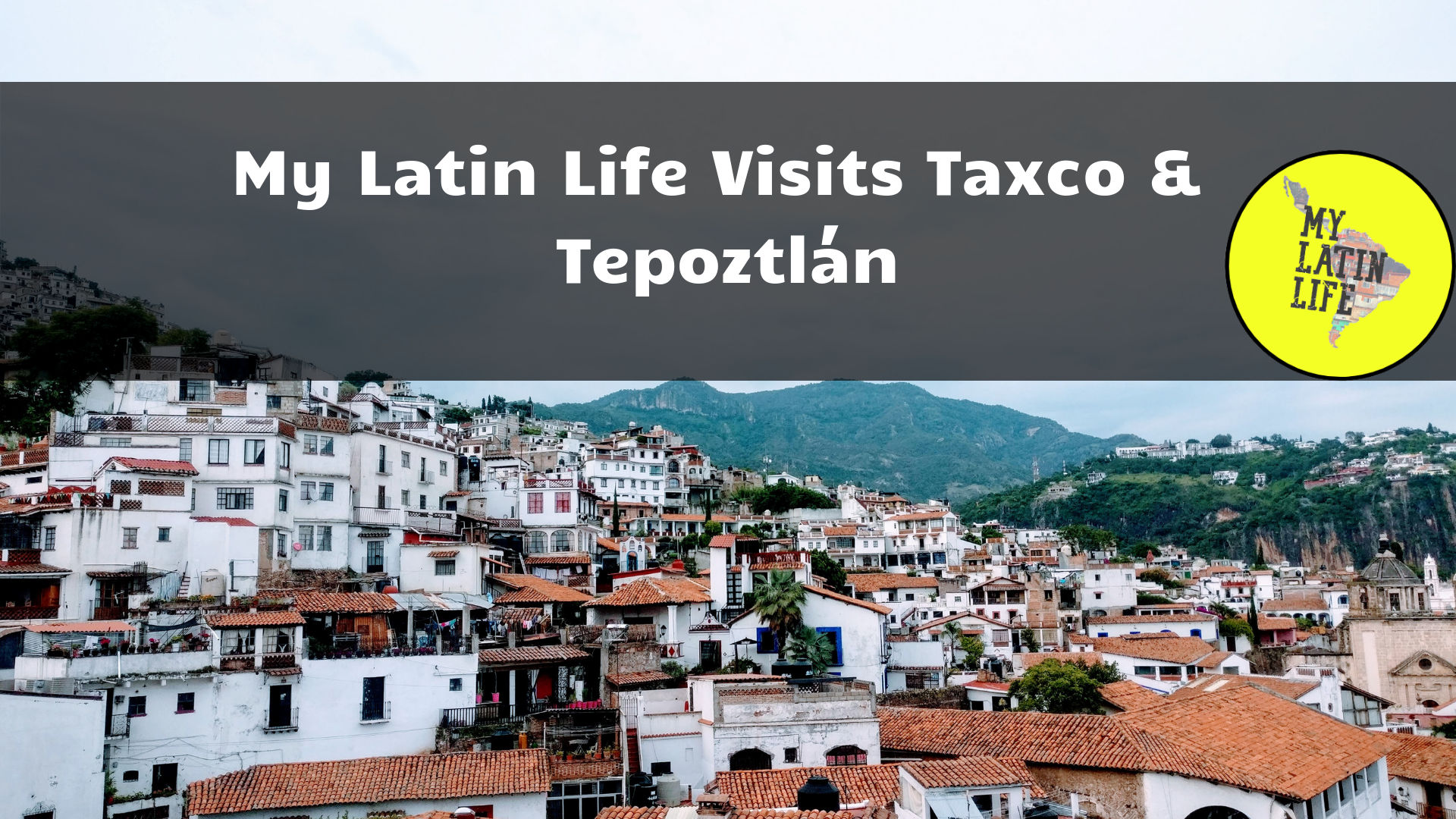 How’s it going, everyone.

Last weekend I did a cheeky trip from Mexico City to Taxco and Tepoztlan, two of Mexico’s Pueblo Magicos.

Because it’s good to get away from the big city sometimes.

What did I think of these two cities?

On Friday I woke up at 6am, took a quick shower, gathered my things and headed off on the metro to the Central del Sur bus station.

It was rush hour and I had to make a few transfers, so I ended up missing the 8:00am bus to Taxco by 5 minutes.

No matter, fortunately they run hourly.

Ergo, I bummed around the station, boarded the bus and 3 hours later I was walking the hilly, cobblestone streets of Taxco, Guerrero!

I’d only arranged for one night in the city so I wasted no time.

I checked in to my Airbnb – a convenient 30 second walk from the main plaza, got myself an (underwhelming) breakfast, strolled some roads downtown and hit an old silver mine for a guided tour.

A decent tour, I must say. Talked to us about the Spanish mining the hell out of the city back in the day. Showed us some gold and silver that are still in the rock walls.

Once that was done with, I fancied a view of the city.

I deemed it a bit late to check out the cable car, so I settled for a viewpoint with a big statue of Jesus Christ.

This is common of Latin American cities: A big statue of Christ accompanied by a lovely view.

After a bit of confusion I found a combi (a little van/bus type thing) that brought me to the base of the viewpoint.

I walked up a hill, then down a smaller hill and voila!

This is what I saw.

I snapped some pictures, took a $3.00 USD taxi back down the hill, went to a restaurant for an (underwhelming) dinner and ventured back to my Airbnb.

The next day I had a few hours to kill before heading off, so I decided to hit a museum: Casa Figueroa, also known as Museo Casa de las Lágrimas.

Now, this was up my alley!

For only $1.50 USD, you get a tour (in my case it was just me and the guide) of a house with a sordid and (possibly) haunted past!

Basically, there was this Spanish guy hundreds of years ago who has this massive property built and oversaw a bunch of cruel acts there, I think under the name of religion. People were imprisoned, tortured and died on the property.

Fast forward, the property is passed down through generations to another Spanish guy from the family. Now, this fella’s daughter loved a local Mexican. She was meant to marry a wealthy Spaniard like everyone did in her family, so the dad wasn’t cool with this “exotic” romance.

End of the day, she defies her father’s wishes, and her father kills her.

Fast forward a few hundred years to the 1950s, thereabouts.

A Mexican artist buys the house-part of the property and lives there with his American artist wife until she dies, after which he marries a Mexican girl (a pretty one, judging by the photos).

He turned the house in to quite a nice living space! Tasteful tiling, his art, books, a stylish bar for entertaining amigos.

In short, it’s like half haunted house with a bunch of sinister passageways and pseudo murder/prison rooms, and half elegant 1950s style Mexican house.

Anyway, I liked it. Worth it if you go to Taxco.

On the way out of the museum, I hit a jewellery store since Taxco is famous for that. Didn’t buy anything. Wasn’t impressed by the designs and have no way of telling if the stuff is real silver or not.

I wandered back to the Airbnb, checked out and walked down to the bus station to grab a bus to Cuernavaca.

From there, I’d go to Tepoztlan.

Bus ride went smooth. About an hour and a half. I decided to get a $8.00 USD taxi from Cuernavaca to Tepoztlan instead of dealing with another bus.

30 mins later, I’d arrived. My phone mysterious lost its signal, so it was a bit of a hassle finding the Airbnb, but I managed.

A place with character! An artist’s house, as you can see by the picture.

Did the usual. Dropped the bag and went off to explore.

I didn’t know what to expect coming into Tepoztlan, but it was a beautiful little town!

A bunch of tourists were there (presumably) from Mexico City and they were all drinking liters of Beer/Micheladas/Mojitos.

Distinctly a party vibe, but not a debaucherous one.

Lots of couples. Not too rowdy.

I could always do with less tourists, but I didn’t mind this.

I hit up one of the most popular restaurants on the main road. It didn’t disappoint. Cheap, and a solid sized meal.

Here’s a picture of the place if you ever find yourself in Tepoztlan.

After that I decided to join the crowd. So, I bought a liter of Mojito and walked the streets.

Real casual-like. Took my time, checked out some of the trinkets being sold, looked at an old church.

I finished the Mojito and popped into a bar for a beer. Live music was playing. Most everyone in groups of 3 or more. It was around 10:00pm then and things were getting pretty quiet, so I called it a night.

Next day, I thought about climbing the mountain to the pyramid but decided to skip it. I didn’t want to get back into Mexico City too late. I bought a coffee, took a last look around the streets, visited two small museums, looked at what the Sunday vendors were slanging and made my way to the bus stop.

Big line at the ticket booth for folks with the same idea as me: wanting to get back to the city before nightfall.

Bought my ticket and had to wait about 2 hours for the bus.

What Did I Think of Taxco?

I was mildly disappointed with Taxco.

Don’t get me wrong the city looks stunning when you approach it by road or see it from above, but nothing beyond the superficial grabbed me.

There are a lot of cars attempting to drive in a city that was originally designed for…horses and mules. You’re walking the streets and vehicles are about 4 inches from you. Lot of exhaust in your face, that sort of thing.

I think it’s great that they didn’t knock down some historical stuff to make space for wider roads, but there are just way too many cars for the way this city is designed.

Also, yeah, it’s touristy. You’ll get asked every 30 feet if you want to buy silver. Fair enough. The folks have to make their living.

It’s comparable with Guanajuato. Both built on hills, and on silver. But it lacks the charm and culture of Guanajuato – two things that grab you immediately upon visiting that city.

What Did I Think of Tepoztlan?

In Tepoztlan I saw more potential.

I quite like this town. It has a peaceful vibe, a mountain backdrop. Attracts artists, and I checked out real estate and it’s nice and cheap.

But, again, it’s built around tourism.

It’s hard to get stuck in to the local culture.

The city seems to be designed for people from Mexico City to get drunk and eat ice-cream (seriously). Ok, that’s not entirely fair – making ice-cream is apparently a big part of the city’s culture and something they’re proud of.

Also, narrow streets and loads of people on the weekend. Cars stubbornly trying to weave through people. Similar to Taxco in that sense. It’s not pleasant strolling around the streets here.

During the week, it’s apparently a ghost town, though.

While I had a nice time, these two cities didn’t seduce me.

Tepoztlan is interesting. It has a different vibe from other touristy towns in Latin America since it largely hosts domestic tourists as opposed to international ones.

If you find yourself staying in Mexico City, I’d say it’s worth a weekend trip.

Taxco is stunning geographically, but beneath that surface I didn’t see much (it didn’t help that every meal I had there was bad).

It’s a pretty town to buy silver in.

In fairness, it doesn’t claim to be anything other than that.

Admittedly, I didn’t spend too much time in either. I’m sure I’d uncover more gems if I had.

Thing about Mexico is that it has so many beautiful cities. And I’ve visited many of them. My standard is high. I’ve been spoiled. Other folks may find Taxco much more charming than I did.

And that’s about what I have to say folks. I’m glad I went. I’ve been shacked up in my house on my computer a lot lately.

Was going a bit stir-crazy, if I’m being honest with you.

It was a needed escape; a miniature reset.

Thanks for indulging me (as always)!