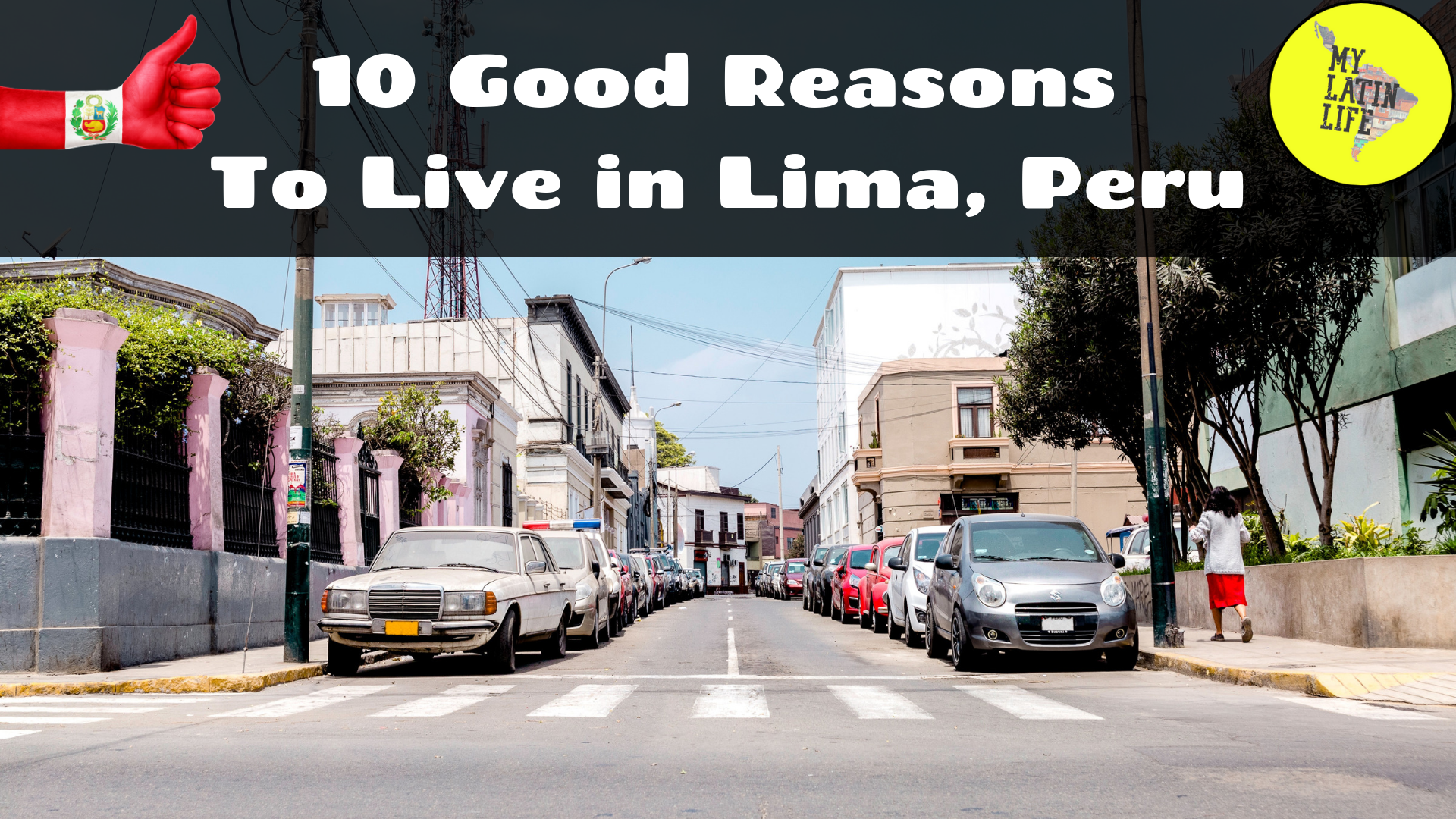 Once again, I’ve got Peru on my mind.

And, seeing as how it’s been 10 months since I left, I figured I’d honor that fact with a post about 10 good reasons to live in Lima.

Hopefully in inspires some of you to check it out.

Peruvian food is widely considered to the best in Latin America, and ranks among the world’s top cuisines.

And Lima is the epicentre of Peru’s extraordinary food culture.

Recently, two Lima restaurants took the #1, #2 and #8 spot for The Best Restaurants In Latin America.

Nearly everywhere you’ll eat in Lima will be good. Whether it’s the acclaimed Maido restaurant, a Chifa, or a local $3.00 USD hole-in-the-wall Menu.

In my opinion, no other country in Latin America holds a candle to Peruvian cuisine.

You will eat like a king in the “City of Kings”.

What’s better than waking up to a picturesque ocean view?

A picturesque ocean view in a major metropolis, where you can enjoy all the perks of big city life.

Best of both worlds.

And, although Lima has bad pollution, you don’t notice it as much if you live close to the ocean (you will, however, notice it in inland neighbourhoods).

Whenever I was feeling down while living in Lima, I’d take a walk on the malecon by the ocean. It cleared my mind, and I always returned to my apartment feeling refreshed.

This is a serious advantage of living in Lima.

Lima is not the cheapest city in Latin America.

Bogota and Mexico City are both more affordable.

That said, it still offers excellent value for money.

Want an apartment in a safe neighbourhood with an ocean view for under $1000 USD?

It’s possible in Lima (not easy mind you, but possible)

How much money will you need to live in Lima, Peru as a single man or woman?

Peru borders 5 South American countries. This makes it an ideal base for exploring the continent.

Ecuador, Colombia, Bolivia, Brazil and Chile are all a short (and cheap) flight away.

The perfect choice for border hopping to renew a visa, or for gallivanting around the region.

While perhaps they’re not initially as warm and welcoming as Mexicans or Colombians, once you get to know them, they make great friends and acquaintances.

One thing in particular that I noticed while interacting with the people in Lima was that my conversations were rarely superficial.

When you’re a foreigner in Latin America, people will typically ask you very cliched questions (e.g. do you like tequila? Do you like Colombian girls?).

In Lima, many more people asked me about…well, myself.

What I did for fun, if I had brothers and sisters, that sort of thing.

Although Peruvians don’t come off as over-the-top social as Mexicans or Colombians, they’re good people.

For what it’s worth, I got along much better with them than I did Chileans or Argentines.

Unlike some Latin American countries that are perpetually going through recessions (*cough* Argentina), the Peruvian economy has been stable and growing for some years now.

If you’re looking to start a business south of the border, Peru is one of the best places to do it.

There are plenty of locals now ready and willing to spend their hard earned soles.

The nightlife here is excellent.

If you’re living in Lima, do yourself a favor and check it out.

Whether you’re into sipping pisco sours in a lounge or hotel, or dancing until 5am to reggaeton, Lima has got something for you.

I’ve come to prefer nightlife in Lima to Nightlife In Mexico City.

The music mixing at most nightclubs in Mexico City is…strange. They often can’t stick to a theme, mixing in reggaeton, rock, salsa, cumbia, bachata on a whim.

It’s a mess, in my opinion.

It’s much better this way.

If you’re a single man (or woman), the dating scene in Lima is quite favorable.

I found locals pretty open to dating foreigners, and most of the girls I met were reliable and trustworthy.

To be blunt, finding reliable and trustworthy partners is slightly more complicated in neighboring Colombia.

Lima is one of the better cities I’ve been in both for mingling and for finding a serious relationship.

Like any big Latin American city, Lima has its problems with crime.

That said, as far as major Latin American cities go, Lima is one of the safest.

On the whole, it feels more secure than they do in Bogota, Quito or Mexico City.

I’ve scarcely felt safer in Latin America than I did while strolling the affluent neighborhoods of Barranco, Miraflores, San Isidro and San Borja…even at night.

Safety is a major concern for folks thinking about locating to Latin America.

I can say with confidence that Lima has more than enough safe areas for an expat to live comfortably.

OK, as the 4th or 5th biggest city in all of Latin America, Lima isn’t quite “undiscovered”.

You will see far, far fewer expats here than you would in Medellin, Panama City or Mexico City.

Is this an advantage?

Some folks rely heavy on expat communities in Latin America.

And, while it’s true that fellow expats can provide a helpful support network, it can become a bit of a crutch.

This means that in Lima you’ll have to engage more with the locals, and therefore you’ll have more incentive to learn the language.

In my opinion, this is a good thing.

Well, thanks for indulging my trip down memory lane.

There’s something special about Lima — it’s become one my favorite cities in Latin America.

And, after living there for a year, it will always have a place in my heart.

If you enjoyed this article, be sure to also check out our Lima city guide.