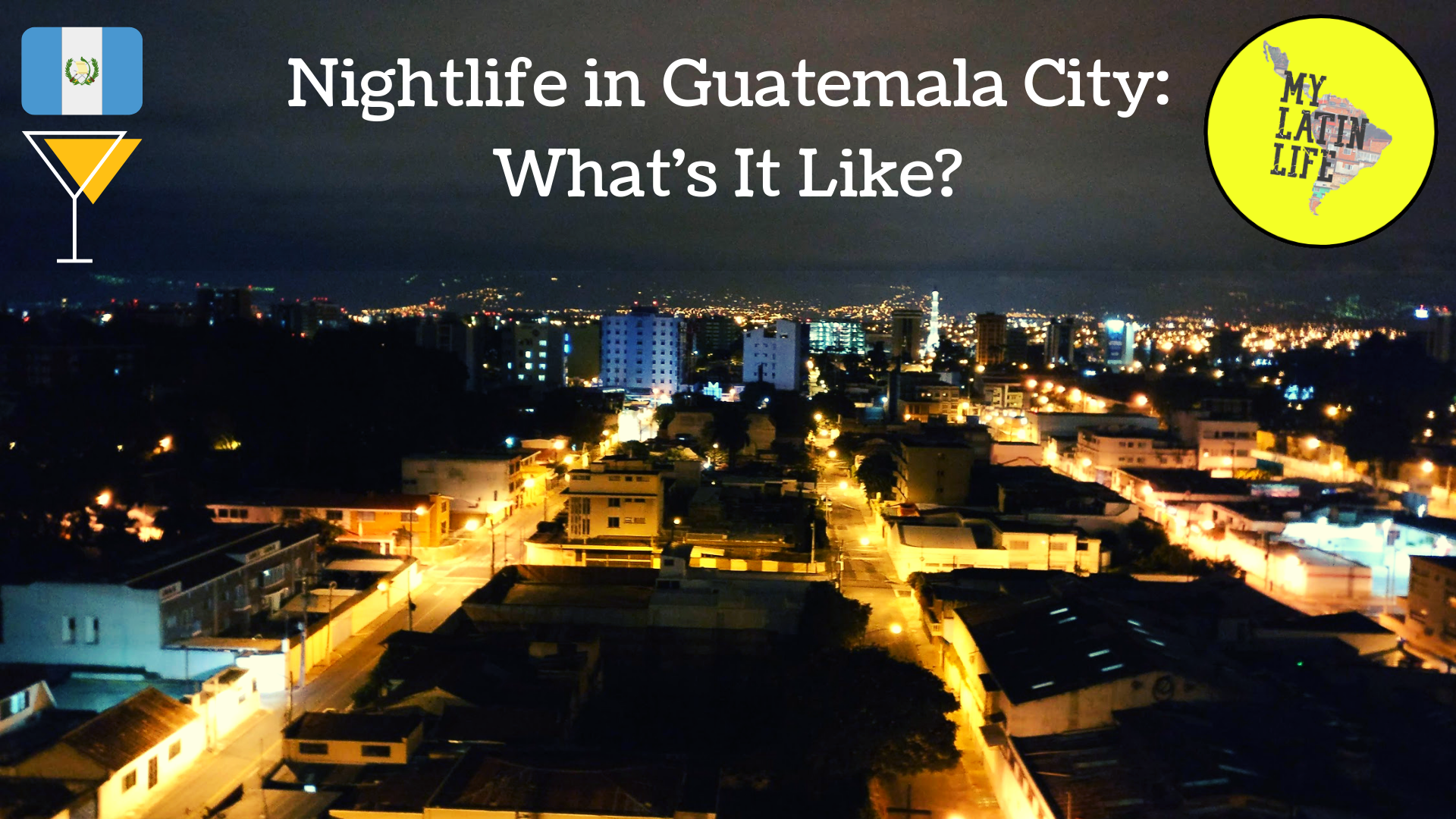 The time has come to talk about nightlife in Guatemala City.

If you’ve read My Recent Post, you’ll know that I spent 5 days in the Guatemalan capital.

And I did my damndest to make the most of it, going out to bars and nightclubs on Thursday, Friday, Saturday and Sunday night.

Well, I’m here to tell you!

Let’s get into it.

The General Atmosphere Of Clubs and Bars in Guatemala City

First thing you’ll notice about nightclubs and bars in Guatemala City is that people go out in large groups.

We’re talking almost exclusively mixed groups, with either the same number of guys to girls, or more guys than girls.

Nothing out of the ordinary here — this is typical for Latin America, more so in cities that are dangerous.

Lots of tables with bottles. Fewer people going up to the bar to buy individual drinks. Less standing room.

And, due to the ley seca (dry law), bars are required to close at 1 am in Guatemala City.

…of course, this is Latin America, so there are a handful of places in the city that stay open later despite the law (as late as 5 am, from what I could discern), but you’ll find your options seriously thinning out after the clock strikes 1.

If you want to stay out past 1 am, make sure you do your research and have a place in mind to keep the fiesta going.

Is It Easy To Meet People?

On the one hand, you’ll stand out as a foreigner in any Guatemala City bar. People will be curious about you, they’ll want to hear your story, perhaps they’ll invite you to their table, or maybe they’ll want to take pictures with you.

All of that happened to us.

On the other hand, the nightlife scene is very group oriented, so if you’re Rolling Solo To A Nightclub, or if you’re with one other friend, large groups can be difficult to penetrate.

For instance, I’m not the type of dude to walk up to a table of 8 people and introduce myself.

I prefer smaller groups, less tables and more standing space than I saw in Guatemala City.

In short, although the scene and set-up of bars aren’t conducive to mingling (tons of tables, not many dedicated dance floors, large groups), I’m nevertheless going to say that…

Yes, it is easy to meet people in Guatemala City clubs and bars.

Is It Expensive To Go Out in Guatemala City?

Like any other Latin American city, this will depend on what neighbourhood you go out in, and what type of bar you’re at.

Generally speaking, it’s relatively expensive to go out in Guatemala City. If you’re at a nice club in Zona 10, Zona 9, Zona 4 or Zona 15, you’ll be looking at $4 USD beers and $60 USD (or more…) for bottle service.

Be prepared to cough up a bit more for the rumba in Guatemala City.

What I Liked About Nightlife in Guatemala City

Reggaeton all the time, baby.

In Mexico City, it’s difficult to randomly stumble upon a nightclub that’s all Reggaeton — they insist on throwing some salsa or cumbia in there.

Not so much in Guatemala City. It keeps the Reggaeton beats flowing.

Gotta love Central America for that.

2. More Than Just Friday and Saturday

Considering that I wasn’t familiar with Guatemala City nightlife, I was pleasantly surprised that I was able to locate a party from Thursday to Sunday. Many Latin American cities are sleepy apart from Friday and Saturday night, so I was pleased to discover that there were some Sunday and weekday options that weren’t duds.

The people we encountered in the bars were friendly. Not much gangsterism (well, a little — I’ll get to that in a later section), not many mean looks, no one looking for a fight.

Aside from waiters perpetually attempting to f us over on the bill, fellow members of the Guatemala nightlife scene were pretty amicable.

What I Didn’t Like About the Nightlife in Guatemala

As I mentioned before, people go out in groups and get a table together, which makes mingling difficult. Your best shot to deal with this is to go out in a group of three or more friends, get yourself a table and order a bottle.

People orbit around their tables.

Best to have a table for yourself from which you can draw others into your orbit.

For what you get, Guatemala City nightlife is overpriced relative to other Latin American cities. Compared to Mexico or Colombia where the fiesta is better on every level, Guatemala City is straight-up robbery.

1 am close times are silly.

Having been in Latin America so long, I’m used to the party getting started around that time, not ending.

As I said before, there are still a handful of places that stay open later than 1 am, but you won’t just come across them by luck — you have to know where to look.

Everyone from Guatemala City will tell you that the party is better in Antigua.

We decided to find out on Saturday night, and hit a bar that was recommended to us by locals on two separate occasions.

I don’t agree with the assertion that Antigua is better than Guatemala City for nightlife, but I can see why people think this.

First, in Antigua you’ll see smaller groups. Seeing two or three girls unaccompanied by guys isn’t uncommon. Since Antigua is safe, there’s no reason to go out with an army of men. This sort of environment lends itself to meeting people.

Second, because there are much fewer options for nightlife in Antigua, you can be pretty damn sure that wherever you decide to go will be full, with a healthy mix of foreigners and Guatemalans.

The issue with Antigua, however, is that there are very few options after the 1 am close time.

It’s my understanding that there’s a “secret” place you can go to after hours, but that’s it.

(who knows if that’s true).

My advice? If you’re going to party in Antigua, get a private Airbnb somewhere. Stock it with booze during the day. Meet a gal or two in the evening and bring them back for a quick nightcap to continue the party before they head back home to Guatemala City.

In closing, Antigua is good for a weekend romp, but I much prefer a later party.

For that reason, I give the edge to Guatemala City.

It’s Sunday night, and I’m hanging out at our Airbnb, about 1/3rd of a bottle of vodka deep.

I hit the town.

Eventually I find myself in a nightclub in Zona 9 that’s surprisingly full, given that it’s a Sunday.

But something is off about this place.

Every single table has bottle service and the crowd doesn’t look like ordinary Guatemalans. These guys are big. Tattooed. Designer shirts.

I try to order a beer, but can’t — only bottle service, I’m told.

It appears that this is actually true, so I order a half-bottle.

The waiter ushers me to a small sofa with a table toward the back of the club. Off to my right I notice an elevated platform with a few tables occupied by groups of Guatemalan guys and their women. This “exclusive” enclave in the club is being guarded by not one, but two huge security guards, one in the middle of the platform, and one off to the left, the latter appears to be guarding a specific table.

After a time, I move to a more central area of the club. I’m just about to finish my little half bottle, debating on whether to stay or go, when I hear a loud crash.

I turn around and notice the girl behind me has collapsed due to drunkenness, taking her table’s ice bucket, soft drinks and what remained of the bottle down with her.

I decided it was time to go.

The next day I find out that the nightclub I’d went to is known to be a hangout for “narco juniors”, basically young, lower level Guatemalans involved in the drug trade.

In retrospect, this should have been obvious, but it didn’t occur to me at the time. And, aside from being approached by a few people asking me where I was from and what brought me to the city, no one really paid me any mind.

No harm, no foul I suppose.

(I won’t be listing this club in my recommendations — although it felt fine, it’s probably not the safest choice).

Here is a list of some decent places we went to, along with some places recommended to us by locals:

There is a fiesta to be had in Guatemala City, as well as in nearby Antigua.

No doubt about that.

Although it falls well short of what you can find in Mexico City, Bogota, Lima or Buenos Aires, nightlife in Guatemala City is still worth checking out.

And that about does it for me, folks!

If you have any specific questions, leave a comment below!