What Is Life Like As An Expat In Mexico City? 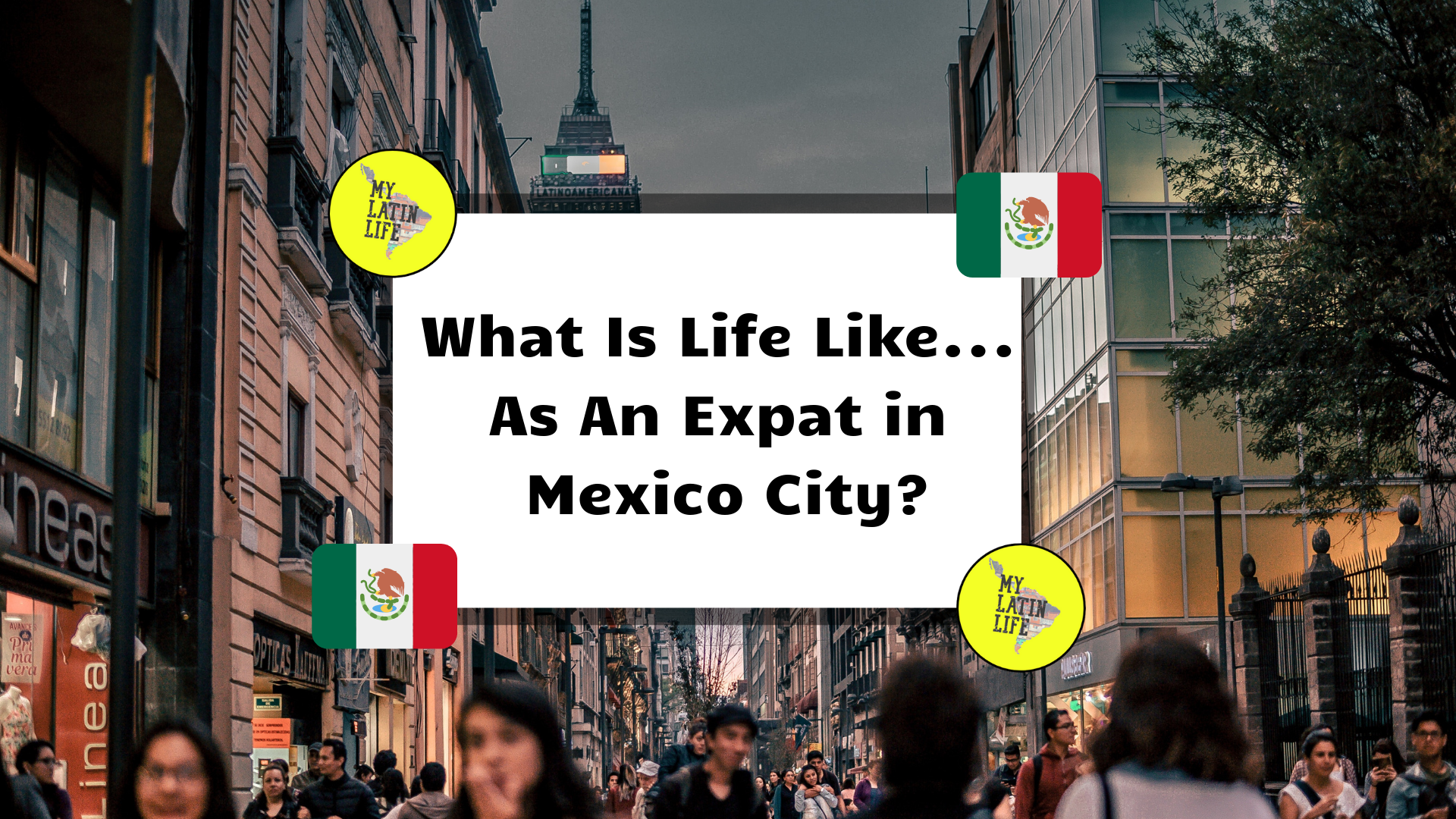 What to expect, how much you’ll spend, the pros, the cons. All that good stuff.

But first, a disclaimer.

I may not be considered a typical expat.

That said…I’m still an expat, goddammit!

So, I’m here tell you what I think.

Let’s get it going.

Of course, your day-to-day life here in Mexico City will depend on you.

I’ll typically wake up late, around 9:00am. I’ll make some coffee and start working from home (I skip breakfast).

Around 2pm, I’ll step out awhile. This could be to get food — ceviche at the market near my house, for instance — or, to buy groceries or hang out in a cafe. Something to get out of the house.

3:30pm or so, upon my return, I’ll read for an hour. Fiction or non-fiction. Whatever I fancy. After that, I get back to work until about 7 or 8pm. This is when my home workout happens. Push-ups, ab-wheel, dips. Usually lasts for about an hour. From 9pm on, is free time. I’ll watch a film, go out for a drink or date, mess around on the Internet etc.

This isn’t ALL I do, of course. My work schedule is somewhat flexible, so I can meet with friends during the day, or do an activity or trip, check out a museum or restaurant.

A simple life, I suppose. But I enjoy it.

The good thing about Mexico City is that, almost regardless of where you choose to live, they’ll be a market or bodega within reach where you can buy groceries or household items. And Uber, bike-sharing programs and an extensive public transportation system make it easy to get around.

Don’t feel like leaving your house? Delivery apps like Sin Delantal, Rappi, or Uber Eats will bring food or groceries right to your door.

How Much Will It Cost?

How much does it cost to live in Mexico City?

Well, again, that will depend on your and your lifestyle.

But, I’ll give you some average figures.

To live in Centro in a one-bedroom apartment, I pay $400 USD a month. That price includes all amenities: gas, water, electricity, maintenance and internet. I wouldn’t say I got a “good” or “bad” deal. That’s about average for this part of town.

If you book a place through Airbnb, expect to pay a little bit more.

Once you find an apartment in your budget, it’s easy to keep other daily expenses low. Ubers and taxis here are very affordable – you’ll rarely pay more than $10 USD to go anywhere in the city. Groceries are cheap, particularly fruit and vegetables (meat prices are about the same as in the US). Bars and restaurants run the gamut: you can get a beer for as little as $1.50 USD, and a meal for as little as $3.00 USD, or you can go fancy and pay what you would in an American restaurant.

Personally? I spend about $1500 USD a month here. And I don’t skimp. I go out to eat and drink quite a lot, spend a lot a month on Ubers and taxis and, well, just buy a lot of stuff I don’t need.

I could easily cut my budget down to $1000 USD a month, if I were so inclined.

My advice? If you’re willing to live in a less fancy neighbourhood, you can get by on $1000 USD/month here in Mexico City.

If you want to live in a more-affluent neighbourhood, I’d suggest a figure closer to $2000 USD/month.

A difficult question to answer!

Basically, it depends what neighbourhood you’re in.

Mexico City does a good job of “confining” crime to certain areas.

This means that if you stick to the richer neighbourhoods (like Roma, Condesa, Polanco), you’re unlikely to be a victim of crime. However, if you venture into some poorer neighbourhoods (Guerrero, Tepito, Doctores), you’ll need to be vigilant.

The majority of crime against tourists is non-violent. Pickpockets, grab-and-run type things.

If it puts your mind at ease, very few expats I know here have been victimized.

The neighbourhood I live in (Centro) could be considered middle class. However, it has a high crime rate. If you want to live in Centro like me, I advise taking taxis at night, unless you’re in the historic centre, which is well-lit and has a high police presence.

What Are The Good Neighbourhoods?

I recommend staying in one of the following neighbourhoods:

These aren’t the only good neighbourhoods, of course. But they are all very central, safe and have everything you could need.

Alternative options could be del Valle, Narvarte, Napoles and Coyoacan. They are a bit more residential, and don’t have as many bars and restaurants, but they are safe and visually appealing.

It will rain once a day, typically in the evening, but only for an 1-3 hours.

Average temperature here in Mexico City is around 18°C (64°F).

In my opinion, the best time to visit is from September to February.

Bring a coat or sweater because it can get a bit cold at night.

The weather here is pleasant – never too hot or too cold. Yet another positive factor of living in Mexico City.

What About The Food?

You’ll rarely meet someone who doesn’t like Mexican food; it’s one of the world’s most celebrated cuisines.

And even if you’re in that minority that DOESN’T like Mexican food, you’ll be happy to know that Mexico City offers a wide range of international culinary options. Also, you’ll be able to find most staples that you’ll find in American grocery stores in Mexican grocery stores.

If you’re a health nut that consumes specialty items?

There are plenty of store (like Estado Natural) that have you covered. Amazon Mexico is also a great place for finding hard to locate items.

In short, you should be just fine in terms of options.

And The Dating Scene?

Now for the fun stuff!

Well, if you’re a woman, you’ll have no problems. Men will love you. Particularly if you have light features (like blue eyes, blonde hair, white skin).

There isn’t really much more to say for ya’ll.

First of all, you’ll want to get it out of your head that women in Mexico City are more “traditional” or “loyal” than in your home country. Those days are gone. People here are rather progressive (for lack of a better term). Dating casually, hook-ups and all the rest are fairly commonplace.

That said, there are plenty of good girls here as well. So, whether you want a serious relationship or just some fun, you can find it here in CDMX.

Online dating is immensely popular among young expats here (particularly Tinder and Bumble). These apps are good for hookups.

If you are looking to meet someone who is open to a more serious relationship, Mexican Cupid is a better option than the aforementioned Tinder and Bumble.

A word of advice: don’t go crazy with these apps. Use them sparingly. I’ve met countless expats and digital nomads whose lives, and most of their conversations, basically revolve around Tinder.

Not a good look.

I understand that it’s exciting when you’re single and arrive to a new city, but also try to go out and talk to women in person! It’s a much more enriching experience.

First, value for money. Mexico City has incredible food, nightlife and infrastructure at a fraction of the price of the United States. The country in general is great value for money. The only better option in Latin America in this respect is probably Colombia.

Second, variety. There are so many interesting areas of the city to check out, and the extensive transportation system make them easily accessible. In Bogota and Lima, for instance, I found there were less points of interest than here in Mexico City (and also fewer safe neighbourhoods).

Third, culture. Mexico has a rich culture and the locals here are very respectful and welcoming. This is something I felt was missing from cities like Santiago, Chile or Quito, Ecuador, for instance.

A few things I’m not so fond of.

The traffic, the pollution and the noise.

Mexico City is a noisy, polluted and congested city. There’s no denying this. And, although you can moderate these things depending on the neighbourhood you live in, they are never far away.

If these things bother you, Mexico City is not a place you want to live.

Right, well that about does it!

Just a few things to expect as an expat in Mexico City.

If there’s anything else you’d like to know, simply post in the comments below and I’ll get back to you with a response.

Or, if you’re an expat here and want to get in touch, shoot me An Email.

Thanks for listening, guys.