A Review Of The Expat Files Podcast 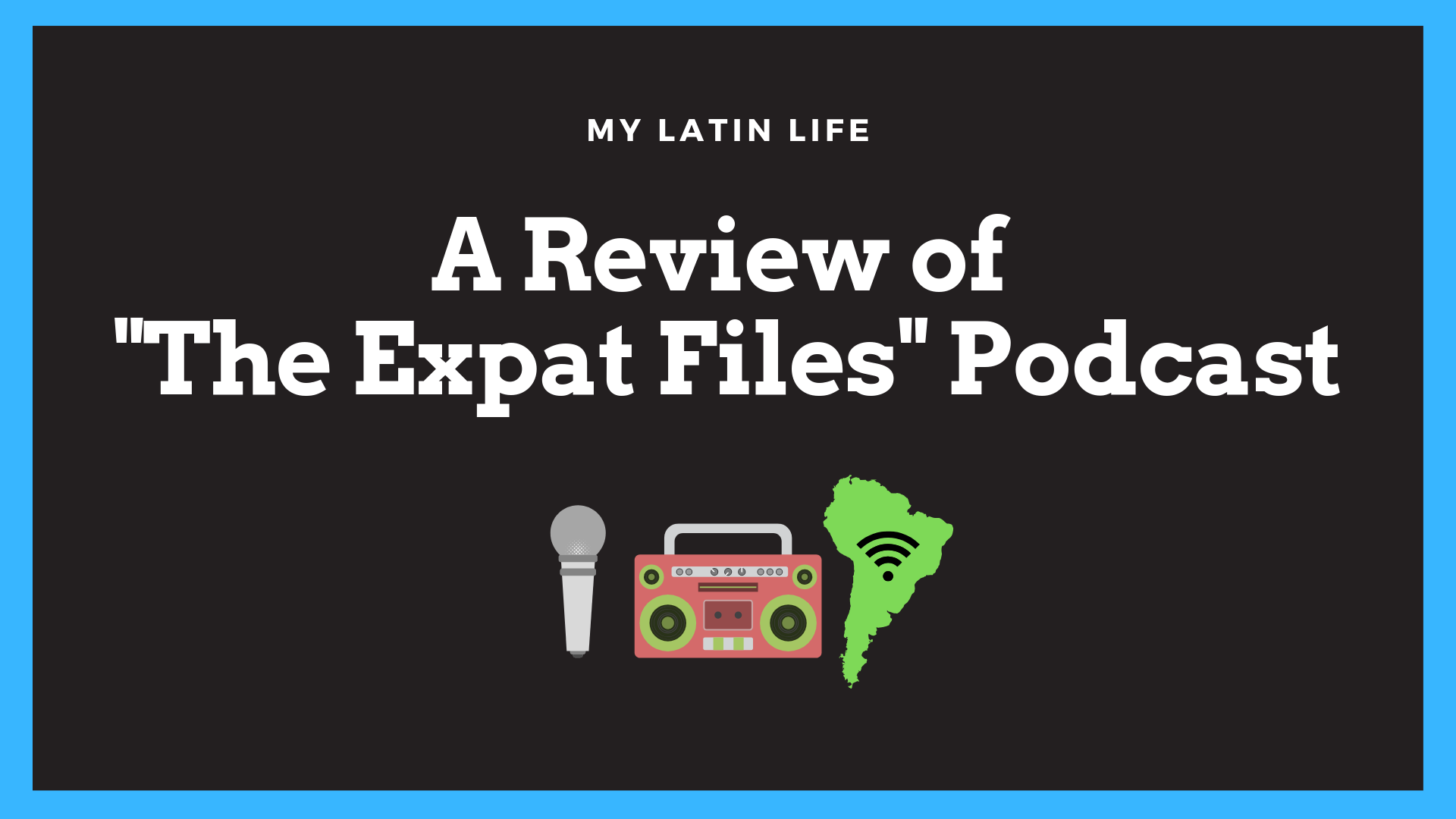 Today, I’ll be writing a review of The Expat Files Podcast.

If you don’t know what it is, I’ll bring you up to speed.

The Expat Files is a podcast that tells you what it’s like to live, work, play and retire in Latin America.

It touches on absolutely everything about life in Latin America.

The host, Johnny Mueller (pseudonym) is crazy prolific – I think he’s got about 800 shows to his name.

I consider him and Expat Chronicles among the OGs of “gringos in Latin America” bloggers.

Now, I haven’t worked through the entire program, but I’ve probably listened to about 200 episodes over the years, so I have a pretty good general idea of what the show is about.

And I’ll say – I’m a fan. I’ve never come across anyone who knows as much about living in Latin America as Johnny does.

That said, I have a few not-so-minor problems with the show.

As Mr. Mueller likes to say, let’s go over “the good, the bad, the ugly, and the great” about the Expat Files Podcast.

The Expat Files addresses everything that an aspiring expat could possibly want to know about living in Latin America. And I mean EVERYTHING. Transportation, utility bills, starting a business, getting residency, pirated goods, crossing borders, dating and relationships, making doctors appointments, bringing your pet down to Latin America, corrupt officials, taxes, weather, chicken buses, backpackers, etc. It’s astounding. I cannot think of a single thing that Johnny hasn’t touched on…and I haven’t even listened to half of his podcast episodes!

With so few Latin America podcasts out there, it’s great that this one is so comprehensive.

Another great quality of this podcast is that it’s direct. The host absolutely does not sugarcoat life in Latin America and he makes very clear the things that piss him off. Despite having lived in Latin America for over 20 years, he hasn’t lost the ability to see blatant inefficiencies, and hasn’t become blind to some of the absurdities of everyday life. But nor has he become angry or bitter. While his direct no-bs delivery might be off-putting to some readers, it’s actually one of my favorite aspects of the show.

It’s much better to hear the truth as opposed to “OMG Colombia is so great I love all the different fruit!😍”

Finally, the podcast is actually helpful. It’s not just one man ranting, raving and musing about Latin America (although there is plenty of that). Johnny dishes out advice that is hard to find elsewhere, and that potential expats can highly benefit from, like how to go about opening a bank account, how not to get scammed on Latin America Dating Sites (or scammed in general), which countries offer the easiest residency programs, etc. The man’s wealth of knowledge is vast in many areas of life, and the fact that he passes on what he’s learned after so many years down south will cut any prospective expat’s learning curve in half.

This is one of my major problems with the show: the host generalizes way, way too much.

…and this is coming from someone who also generalizes – if you read my blog, you’ll know that.

And I get why he does it. Heuristics work well, particularly when you’re trying to give advice to someone who’s not familiar with something. For instance, I might say that Colombian girls are more attractive than Mexican girls. This doesn’t mean that ALL Colombian girls are more attractive than ALL Mexican girls, but on the whole, it’s an observation that most people will agree with.

If he were to get into various nuances and exceptions, he’d probably just confuse his listeners.

But Johnny takes his generalizations amusingly far. To the point where he essentially write off all of Mexico and tells people not to relocate there because there’s too many gringos, narcos and corruption (meanwhile, he sings the praises of Zeta-controlled Guatemala. . .). And his comments about Latin Americans (“Latins” as he calls them) are often too ridiculous even for me.

Like saying they’re “gringo-wannabes” if they get an expensive cable TV package (?)

It’s Behind The Times

Although Johnny is insanely knowledgeable about Latin America, all of his viewpoints and observations about culture seem to be about 20 years out of date as far as most Latin American countries go.

I have a theory as for why this is, which I’ll get to in the next section.

I remember he once said that it was difficult to find a Latina over 25 that didn’t have a kid. Perhaps that was true 20 years ago, but it isn’t now (I’ve met and hooked-up with many Latinas over 25 without kids!). Another comment about most people in Latin America cooking with wood had me wondering where the hell exactly Johnny is spending his time.

Which, again, is something I’ll get to in the next section.

When you have about 800 podcast episodes, repetition is inevitable. However, The Expat Files repeats itself. A lot. In fact, I’d say about 20% of the episodes cover more or less the same topics in the same fashion. He recently did 3 consecutive episodes where he covered dating in Latin America…and they were all the same.

That said, the sheer amount of content he puts out sort of overrides the repetition. Nowhere on the Internet will you find a deeper vault of information about what it’s like to live in Latin America.

Something You Need To Understand About This Podcast

After running through about 10 episodes of the Expat Files this week, something was bothering me.

I couldn’t understand how one minute I could be laughing and/or nodding my head at Johnny’s astute commentary, and the next minute scratching my head thinking “this doesn’t match my experience living in Latin America”.

And, folks, I finally figured it out!

What you have to understand about this podcast is that it approaches life in Latin America from two dominating perspectives.

I guess this makes sense because (I believe) Johnny lives in Guatemala, but it can make things a bit misleading for the listener. His comments about people cooking with wood and every girl over 25 having a kid doesn’t ring true to me as I sit here in downtown Mexico City, but it would in rural Central America.

As a big proponent of “getting off the gringo trail”, Johnny tends to not talk about cities – or even entire countries – that tourists tend to go to. So that means, no Mexico, no Colombia, no Costa Rica.

In fact, it’s curious – he doesn’t really give out much country-specific information (unless he’s telling you where not to go). He basically just talks about Latin America as though it were just one country.

I suspect that, while Johnny has visited just about every country in Latin America, he’s spent the recent majority of his time in rural Central America. This isn’t to say I doubt his knowledge about major cities, he just doesn’t really get into talking about things that you aren’t likely to find unless you live in a smaller town.

Just keep that in mind.

If you’re thinking about relocating to Latin America and want to know what to expect in regards to day-to-day life and possible frustrations and complications you’ll encounter, this is the podcast for you.

In my opinion, the best, most valuable part of this podcast is the business angle. Every so often, Johnny talks about foreigners who have started successful businesses in Latin America, what industry they’re in, and how they made it work.

That kind of information and insight is very hard to find.

When Johnny talks about “gringo businesses”, I listen.

OK, so a few critiques, but nothing major.

This is still by far the best podcast about living in Latin America available on the Internet. And the advice Johnny gives is helpful, insightful and based on years of “boots on the ground” experience.

If you want to move to Latin America and build a new and different life for yourself, this podcast is a must-listen.

Heed his advice and observations (because he knows his stuff), but don’t get too colored by some of his more extreme generalizations.

You can check out the podcast here: The New Expat

I highly suggest you do!