What Happened To Venezuela? An Explanation Of The Current Crisis 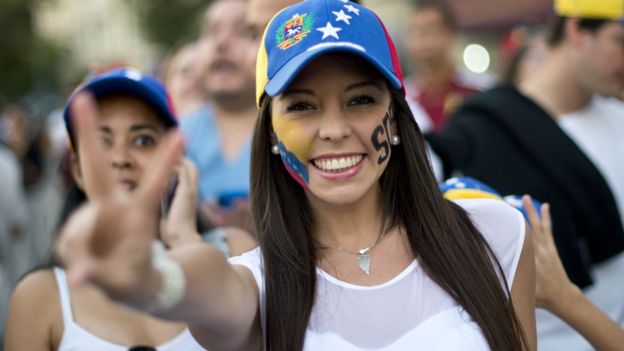 You may have seen some crazy news about Venezuela on the Internet.

So, how did this happen to a country that was once among the richest in Latin America?

How It All Started

Hugo Chavez was elected in 1999, at the beginning of a global oil boom. During his presidency, oil was far and away the country’s biggest export and, with Venezuela sitting on the world’s largest oil reserves, this commodity alone was enough to cover most of Venezuela’s bills. There was little incentive to develop any other industry, since the country could simply purchase anything they didn’t produce with all that sweet, sweet, oil money.

However, in late 2002/early 2003, The Country’s Oil Workers Go On Strike, crippling the nation’s major cash cow. In response, Chavez fixes the exchange rate between the Bolivar, Venezuela’s currency, and the US dollar. This limits access to foreign currency and means that anyone who wants US dollars has to go through the government.

In other words, if you were a Venezuelan businessman importing kitchen appliances, you would have to prove that the items you were importing were essential items simply to change your own money to dollars in order to pay your suppliers.

Now, although this was annoying as hell, as long as your business/products were approved by the regime (in the early days, most imports were approved), eventually you’d be able to get your dollars and conduct business.

In 2013, Hugo Chavez dies and his foreign minister Nicolas Maduro takes over.

The government starts freaking out. Since it had been spending all of that oil money on fat salaries, food subsidies and, to be fair, some social programs for the poor, it soon realized that if this slump in oil prices continued, it wouldn’t have a pot to piss in.

Whereas other oil producing nations had saved their money, Venezuela had splashed out. There was nothing left.

Its fixed exchange rate also meant that there was little access to US dollars, so people were willing to pay a premium to get their hands on greenbacks. And, because the government insisted on keeping this pre-oil collapse exchange rate (about 6 Bolivars to 1 US dollar) to avoid price increases, a black market sprung up.

Then the obvious happened. People started buying US dollars for cheap from the government, and Trading Them On The Black Market for profit. Some folks were able to make A LOT of money doing this.

This totally rattled the exchange rate. Now, what normally happens when a country finds itself in this situation is that it admits it blew it, lets the exchange rate go back to normal and watches uncomfortably as prices rise.

The government was so desperate to hang on to the “socialist utopia” that it believed it had built, it was unwilling to accept reality. If it had simply acknowledged that the economy was in shambles and attempted to build up its industry over time, things would have improved and perhaps the country wouldn’t be in such a mess today.

But no. Instead, it doubles down. It decides to print more money and inflation skyrockets.

What did the government do when prices started going insane?

It brought in price controls. In other words, it told businesses how much profit they were allowed to make.

This, accompanied by the rapid inflation, basically made running a business impossible.

Since Venezuela had neglected its domestic industry during the oil boom years, it relied heavily on import businesses to supply its citizens with basic goods. Now that these businesses weren’t profitable and therefore had to shut down, Venezuela faced massive shortages from everything from medical supplies to toilet paper.

A worthless currency. Lack of basic goods and services. A corrupt government. No way to make a living.

People aren’t going to be happy for long.

The Most Recent Protests

From April to June, Venezuela saw its biggest protests in recent history. Opposition leaders and anti-government protesters took to the streets, demanding that Maduro relinquish power. In response, the president continued to shoot down any attempts of a referendum, and delayed both local and state elections.

However, the massive street demonstrations were short-lived. In October of 2017, Maduro’s socialist party won the nation’s governorship elections in what was widely considered a rigged vote. He also “won” last weekend’s mayoral elections.

Despite massive opposition, Maduro was still able to consolidate his power. As a result, Venezuelans (understandably) began to lose hope, and the protests died down.

What is Next for Venezuela?

Venezuela is defaulting on bond payments, its oil output is declining and its currency continues in downward spiral (down over 50% of its value this month alone).

Even if the poorly-organized opposition miraculously found itself running the country tomorrow, it would have to rebuild the country’s political system and economy from scratch.

So, in the extremely unlikely event we see a new government in the 2018 elections, it would be – at the very least – another 15 or 20 years before things return to any kind of normality.

What’s more likely to happen is that Maduro will steal the 2018 elections, China will stop lending money to Caracas due to Too Many Unpaid Debts and Russia will become the country’s only lifeline (apart from Cuba, but it’s hardly in a position to help financially. In fact, it too is Turning To Russia To Meet Their Oil Needs). Russian creditors will lend money to Venezuela in exchange for first-access to the country’s massive oil reserves. In other words, just about the only export that makes Venezuela any money will be controlled by Moscow. The Venezuelan people will continue to starve, and Maduro will use the money from Russia to continue to pay himself, his fellow politicians and the military well to ensure a coup won’t take place.

As for how long this situation can last? Who’s to say. Historically, ruling governments don’t survive hyperinflation for very long. That being said, if Russia can help Venezuela increase the output and quality of its oil (something that is, obviously in Russia’s interest to do), Maduro’s regime might be able to hold on to power for a few more years.

Basically, it’ll be a balancing act. Russia wants cheap oil, but in order to keep it flowing, it must ensure it provides enough financial support to Caracas to sufficiently pad the pockets of both the ruling party and the military to stave off any revolts. If ever Russia decides the juice isn’t worth the squeeze, Maduro’s days will be numbered.

That’s what the situation looks like heading into 2018. You gotta feel for the Venezuelan people, who are getting bent over the barrel time and time again by this tyrant.