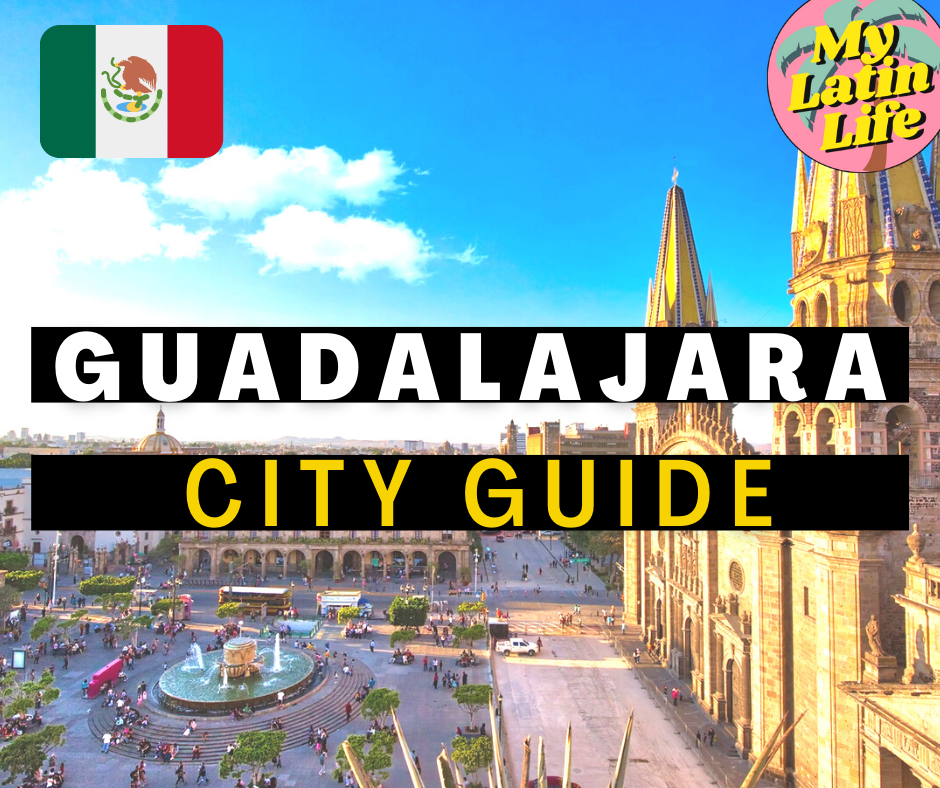 If you like fountains look no further, because Guadalajara has them in spades.

It also has many beautiful women, parks, plazas, and churches for the tourist to sink his/her teeth into. It also offers great tequila tours a short drive away, cool nightspots, elegant museums and art galleries, and wonderful cuisine. The cost of living is somewhat expensive for Mexico, but only the fraction of the cost of living in the United States. Guadalajara is also much more walkable. There is a rental bike network here, and you can get a cheap bike pass and wizz around town. Uber is very cheap and efficient as well. The city is becoming increasingly popular with expats from the United States and digital nomads looking for an authentic Mexican experience.

Digital nomads are attracted to Guadalajara for the low cost of living, great food and music scene, nightlife, and good weather. People are calling Guadalajara the new Medellin. It may actually be better. But don’t tell anyone.

DAY TRIPS AND THINGS TO DO IN GUADALAJARA

Hike at the Barranca de Huentitan. Awesome hiking area on the outskirts of town.

Visit the Catedral de Guadalajara. This is one of the most historically important sites in the city.

Visit the Museo de la Ciudad de Guadalajara. It is a small museum that you can check out quickly.

Check out the Museo del Ejército y Fuerza Aérea. It is located on the east side of the city, but it’s worth it to see the old tanks and army stuff.

WHERE TO STAY IN GUADALAJARA

There are two area I recommend to stay in Guadalajara. You can stay one of the nicer neighborhoods in the centro (downtown), or in the suburban but-still-very-urban neighborhoods where the upscale malls are.

If you would like to stay downtown, I suggest barrio Americana. Libertad is a beautiful street lined with trees, small plazas, and cafes for getting work done. You should aim to stay somewhere between Chapultepec and Templo Expiatorio. Staying in Americana is the best option for travelers and nomads visiting the city on short visits who want to see all the sights of the city.

Downtown is cool, but in Guadalajara a lot of the rich people frequent a different area called Providencia. Here you’ll find upscale dining, office towers, and a mall called Punto Sao Paulo. Staying in Providencia is a better option for expats and nomads looking for longer stays. Providencia is also closer to Zapopan (huge city-within-a-city) and Bosque Los Colomos (great place for dogs and long walks).

HOW TO RENT AN APARTMENT IN GUADALAJARA

Put aside about $500 for an apartment in Chapultepec. It’s worth it. Another area worth taking a look at is the ‘Chapalita’ area of Zapopan. Rents are less expensive there but it’s still well located with young professionals and tons of restaurants.

HOW LONG SHOULD I STAY IN GUADALAJARA?

Guadalajara is best enjoyed as a medium to long term location. One to two months is the perfect amount of time to see everything and maximize your experience. There are good deals on Airbnb and monthly rentals are widely available. There are many weekend trips that can be undertaken from Guadalajara to Chapala and the pueblos magicos of Jalisco.

Check out Casa Bariachi for live mariachi performances while you eat.

Must try the carne en su jugo from Karne Garibaldi, the fastest restaurant in the world.

BEST BARS AND NIGHTLIFE IN GUADALAJARA

Nightlife in Guadalajara is concentrated in the Chapultepec, Zapopan, and Andares Mall districts. It’s not hard to find something you’ll like. If you don’t have long in the city, hit Chapultepec. There are many bars and clubs that are busy on the weekend. If you have some time in the city, branch out to Zapopan for a more local vibe. Head to Andares Mall if you want an upscale vibe with rich, good looking (but maybe a bit stuck up) people.

Bananas: Good place to pop your Guadalajara cherry. Get comfortable here, and then move on to some of the bigger and badder nightclubs along Chapultepec. Be sure to dress like an adult though, it’s important to look dapper here.

La Insurgente: Similar to Bananas, a patio-style bar on avenida Chapultepec. They have really good 2 for 1 drink deals almost every night. Good place to get started.

Kanna Club: Crazy nightclub with a pyramid-shaped roof. It’s not popping every night, but when it does it gets wild.

Botanero Veintiuno: It’s a chain for bars and there’s a bunch in different neighborhoods around the city. People go here knowing they are going to dance and drink. Plays mostly reggaeton.

Abolengo: Classic nightclub chain with locations all over Mexico. The GDL one is in Andares Mall.

Guadalajara is a reasonably safe city. Usually crime against tourists is limited to purse snatching or pickpocketing. Still, don’t make a habit of walking long distances at night, especially in and around Centro. Try not to use your phone in public too much.

Guadalajara is one of those few cities with good weather all year round. The consistently good weather means that GDL is a city that is very “visitable” any time of year. One thing to keep in mind is Guadalajara is has many students in the city. Because of all these students, the bars and nightlife scene is busier during the school year (September to April).

HOW TO GET TO GUADALAJARA

Guadalajara is extremely well connected by flights and buses. There are direct flights from many American cities. Guadalajara, due to its relatively central location, is a great jump off point to visit Sinaloa to the north or Colima to the south. Most of Mexico can be reached by bus from Guadalajara. Puerto Vallarta is a 4-5 hour drive, and Mazatlan is a 6 hour drive.

COST OF LIVING IN GUADALAJARA

You’ll need a minimum of $1020 USD/month to live in Guadalajara, Mexico

Guadalajara has an amazing selection of cafes offering fresh ideas and modern spaces. Mexican coffee is amazing and the cafes will often have artisanal coffee from Veracruz, Chiapas etc. There are many coffee shops in Guadalajara for digital nomads to come get some work done.

Stay long term in Guadalajara if you can, you’ll get more out of it. This might be the best big city in Mexico. For digital nomads, you can easily base up here for a month or more. Almost every Canadian or American that comes and visits Guadalajara enjoys their time here. Wealthy expats can also buy up the comparably cheap property in the high rises, city center, or suburban areas. It’s a very well-designed and more liveable than Mexico City. For me, at first it just felt like any other city. After a while it grows on you. Take some time to build a social circle and explore more of the city –  I bet you won’t want to leave. You’ll see why if you go to Guadalajara.