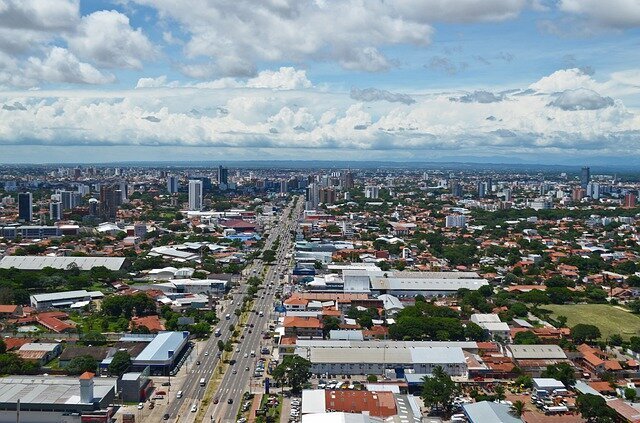 Last updated: 2021
All prices in US dollars
Cost of living metrics are based on minimum living expenses for one person

Santa Cruz (or, Santa Cruz de la Sierra) is the capital and largest city of the Bolivian department of Santa Cruz. It is known as being one of the economically productive and successful cities in the country — the standard of living and quality of life here is considered to be among the best out of any Bolivian city.

Yearly temperatures range from 15°C to 31°C. May to September is a good time to visit to avoid the rain and heat.

Although likely the most “dangerous” city in Bolivia, Santa Cruz is nevertheless safe by Latin American standards. Normal precautions should be fine here. Avoid walking around after dark, and leave the fancy jewellery at home. You should be fine walking around the city during daylight hours.

RENT AN APARTMENT IN SANTA CRUZ

Your minimum budget for renting an apartment here should be around $450/month.

COST OF LIVING IN SANTA CRUZ

$1300/month is a good monthly budget for Santa Cruz.

Latin American Cupid allows you to talk with singles in Santa Cruz and set up dates before you arrive in the country. For this reason, we recommend it.

Aside from starting your own tour agency, there aren’t many job opportunities for foreigners here.

IS THERE UBER IN SANTA CRUZ

IS SANTA CRUZ A GOOD PLACE TO LIVE?

We consider Santa Cruz to be an underrated expat destination. The city has all the amenities you’d need, it’s surrounded by pleasant nature and worthwhile day trips, it’s affordable and it’s safe by Latin America standards. We expect this destination to grow in popularity among both expats and travelers in the coming years.