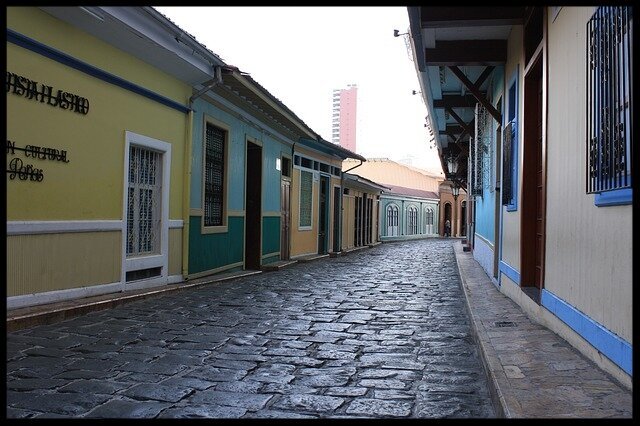 The largest city in Ecuador and the main business and commerce hub. I’d consider it Ecuador’s most modern city. While it may not have quite the colonial charm as Quito or Cuenca, it does have a nice boardwalk and area surrounding it. It’s also Ecuador’s best option for year round nightlife fun! If you want a bustling city, this is your Ecuador option. Expect to pay a little more to live here than you would any other Ecuadorian city. It also boasts some of the best looking women in the country.

A better chance than in Quito, perhaps because it’s a bigger city. Make sure you go out to places that are close to where you’re staying. Girls in Guayaquil go out in big groups, usually mixed with guys. You are unlikely to see a group of two or three girls by themselves. It would be really good to know Spanish here; although a surprising number of girls know English, a few phrases in their native tongue will soften them up like butter in Baghdad. It’s probably one of Ecuador’s least socially conservative cities. A common coast vs mountain city phenomenon.

Online dating in Guayaquil, Ecuador: Latin American Cupid allows you to talk with girls and set up dates before you arrive in the country. For this reason, I recommend it. Try It today.

Only good at the clubs. You won’t see that much of interest in Guayaquil during the day, unless perhaps you’re in a fancy restaurant with a patio during lunchtime, or in a high-end shopping mall. That said, it’s still one of Ecuador’s better cities for women (probably the best). And the recently arrived female immigrants from Venezuela certainly don’t hurt the cause! But don’t come here expecting Colombia quality girls. In short, Guayaquil women are certainly fine enough, but nothing exceptional by Latin American standards.

RENT AN APARTMENT IN GUAYAQUIL

COST OF LIVING IN GUAYAQUIL

You’ll need a minimum of $977 USD/month to live in Guayaquil, Ecuador

Guayaquil is the bar/nightlife capital of Ecuador. But that accolade is more a default of its size and population than anything else. Most of the action goes on in the Zona Rosa. It’s heavily patrolled so you shouldn’t have to worry too much about security. Zona Rosa offers the ability to barhop, but I wouldn’t suggest it unless you don’t mind paying multiple cover charges. But go wherever the wind takes you.

I recommend: Fridda. Located in centro as opposed to Zona Rosa, but if you’re staying close to the centre, this is your best choice. And, most importantly, the girls are actually hot, which seems to be rare for Ecuador, so enjoy. But please, don’t look like too much of a backpacker if you come here. Take a shower, dress nice, comb your hair and the girls will respond positively.

Guayaquil is a bit dangerous. The malecon is fine during the day, but I wouldn’t advise venturing into the outskirts of the city, or really anywhere that you aren’t familiar with or haven’t researched. Not as many tourists as Quito or Cuenca so you’ll stand out to criminals as a potential target. I didn’t find safety in Guayaquil much better than a large Colombian city, despite large Colombian cities having worse reputations. In business and shopping districts you should be fine during the day. At night, I do recommend taxis even for short distances.

I’d call it a bit of a shit hole if I were put under oath. I tend to avoid cities like this. But I’ll give Guayaquil some credit for its promenades and parks. They are definitely the best things to experience in a city that offers little else to do during the day, and that lacks the colonial charm of many other Latin American cities, both large and small.

Want to meet women in Guayaquil? Use Latin American Cupid