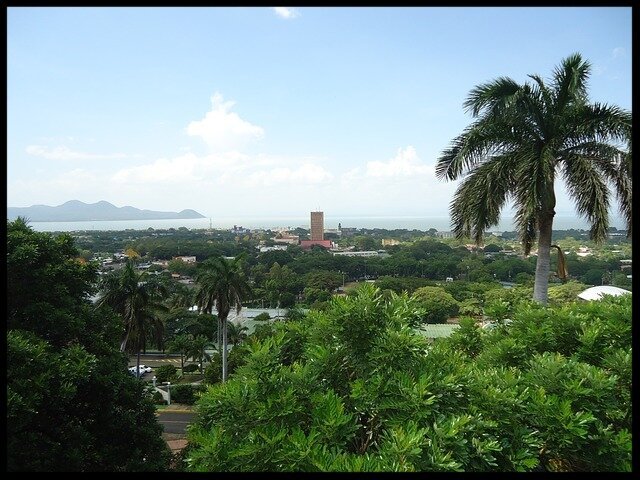 The capital and largest city in Nicaragua.

Not a particularly attractive or appealing city in the traditional sense, but still worth a couple days…actually, that’s not entirely true. Geographically, the city is actually rather nice. Set on a lake, a decent amount of greenery in some places, nice weather (although maybe too hot for some).

Unfortunately, the city planning (or lack thereof) leaves much to be desired. It’s kind of a crime ridden dump. Safety and cleanliness issues are also a concern. Managua is the only city of any real size in Nicaragua. Most digital nomads and expats won’t spend too much time in Managua, but rather use the city as a transit point. Many head to the colonial towns of Granada and Leon.

RENT AN APARTMENT IN MANAGUA

$400.00 to rent something in Managua in a good area with all the comforts.

WHERE TO EAT IN MANAGUA

Los Ranchos: Solid restaurant on the PanAmericana near Wal-Mart.

Chamán Bar: One of the most legendary clubs in Central America. Get ready for a crazy night. It’s in the shape of a pyramid, which is always a good sign. Many-a-gringo have entered these doors. Welcome to the club.

Managua is not very safe. Chances are that nothing will happen to you, but the problem with Managua is that there isn’t much distinguishing a safe neighbourhood from a dangerous one – for the most part, it all looks a tad seedy. Most tourists GTFO of Managua as quickly as they can. Don’t be one of them. Be different :).

It’s worth nothing that Nicaragua is considered one of Central America’s safest countries. Outside of Managua, there aren’t many serious safety concerns.

HOW TO GET TO MANAGUA

Managua is home to only international airport in Nicaragua. Many flights connect through Miami, Panama City, or even San Salvador.

Managua can also be reached overland from Honduras and Costa Rica.

Getting around the country itself can be a bit less straightforward. There are bus routes that connect various stations in the major cities (i.e. Mercado Huembes in Managua). Some buses are express, but most will have several stops between origin and final destination.

If you prefer more comfort, or are traveling in a group, there are taxis and private shuttles that cost significantly more. Taxis within cities shouldn’t cost more than 5-20 USD, but can go up to 100 USD if going from one city to another (i.e. Managua to San Juan del Sur).

WHERE TO STAY IN MANAGUA

The best area of Managua is . There is a good mix of hostels, Airbnbs, and hotels in the city. Many young people choose hostels, digital nomads choose Airbnbs, and families use hotels. Some of the hostels are cash only, so be prepared for that. In Managua you will probably want to stay in a hotel to ensure a smooth check in, a good shower, and strong wifi.

COST OF LIVING IN MANAGUA

Managua has a higher cost of living, than the rest of the country. For hotels and lodging, Managua is the most expensive place  in Nicaragua by a considerable margin. For a lower cost of living, head to Leon, Granada, or even San Juan del Sur. Outside of Managua, food and drinks are very, very cheap. Hotels are available, too, for an older crowd, although certainly more expensive. Some of the hostels are cash only, so be prepared for that.

In Managua there are only two seasons — dry and rainy. The dry season extends from November to May.  The rainy season ranges from roughly June to October. In Managua, the the wettest month of the year is probably October. The temperature ranges from 75 to 95 degrees F (23 to 35 C) for most of the year. As you might expect, Managua experiences a high level of humidity. It can get pretty muggy. June is the most humid month, at 84% average humidity. April is the driest month at 62% average humidity.

The best time if year to visit Managua is in the dry reason, between late November and May. In fact, try and avoid visiting Managua during the rainy season. In the rainy season there are days where it will rain nonstop the entire day. Importantly, in the rainy season, getting around the country will be more difficult due to roads flooding out. In the rainy season expect it to take significantly longer to travel between cities. The more rural you go, the worse the road conditions are going to be. Another downside of the rainy season is you won’t be able to do picnics or hiking or other outdoor activities.

A rather charmless place, but good for a couple nights out. Honestly, I’d only stick around Managua for the cheap food and nightlife. That said, like anywhere, if you decide to move to Managua and get into a good social circle, life will be good. In fact, due to its low cost of living and lower crime rate than a lot of major Latin American cities, Managua’s expat population might just increase in the coming years. Call me crazy, but such a thing wouldn’t surprise me! All that said, for the time being I still recommend Granada or Leon over Managua.