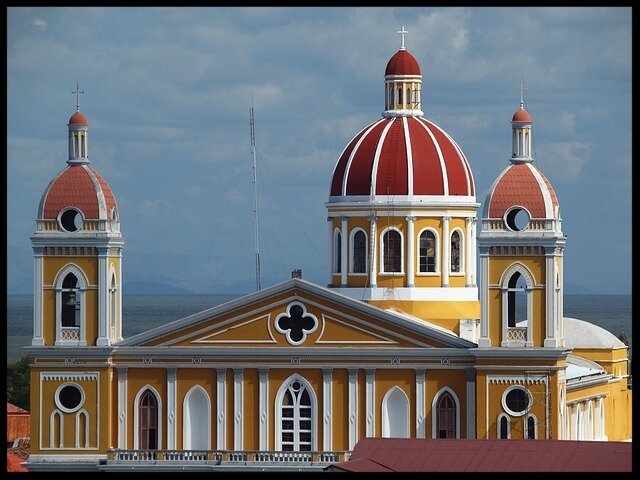 Granada is the oldest colonial city in Nicaragua, and the largest tourist destination in the country.

Many colorful buildings and a rich history of conflict and conquest. Although most folks who visit Nicaragua will stop here, I’d still say it’s underrated (after all, not all that many people visit Nicaragua). Locals are friendly, the weather is favorable and it has an understated colonial charm.

Churches. Even if it isn’t your thing, take some time to check out the many different ones. Interesting from both a historical and architectural standpoint.

RENT AN APARTMENT IN GRANADA, NICARAGUA

THINGS TO DO IN GRANADA

The must do activity in Granada is visiting the active volcano of Mombacho. Mombacho tops out at nearly 4,500 feet. The site is also home to cloud forest, hiking trails around the crater, and zip lines.

Do a coffee plantation tour. People here are proud of their coffee!

COST OF LIVING IN GRANADA, NICARAGUA

Nicaragua is a very cheap country for someone coming from the US, Europe, or any other richer region. USD is widely accepted in the country, but you’ll often make out better using the local currency. Many nicer restaurants will accept credit card. Some spaces may charge a fee to use credit cards.

Nightlife in Granada is not quite as good as in Leon, its colonial city rival, but there’s enough if you’re only there a few days. Stick to La Calzada, a main street which contains most of the bars and clubs – I think there are about 30 restaurants and bars in Granada. You’ll find a mix of both locals and tourists. A few good looking European girls and a few good looking Nicaraguans. La Calzada is busy enough every night of the week, but if you can get a group together, I’d recommend heading out to one of the clubs by the lake. I don’t know the names of them.

The Magician Lounge: Expect a show and a unique experience. Mind reading, magic and mentalism. Definitely check this place out if you’re in town.

HOW LONG SHOULD YOU STAY IN GRANADA?

One week in Granada is the perfect amount of time. Hit the hostel bars, do some hiking. See a few waterfalls. You can see everything pretty quickly. You’ll want to enjoy it but it can start to feel small pretty quick. You could spend a one month here if traveling as a couple. You could also spend a month here if you want chill in nature, work remotely and focus.

WHERE TO STAY IN GRANADA

Most of the hostels are in the area around the Parque Central de Granada.

HOW TO GET TO GRANADA

Take a 1 hour bus from Managua. You can expect buses leaving for Granada running on an hourly basis, 7 days a week. Most shuttles or taxis to San Juan del Sur from Managua pass through Granada as well.

Granada is safe. It’s unlikely that you’ll have any problems here, even at night. The city feels very pleasant  with all the old Spanish style architecture and the laid back vibes.

Plenty of volunteer options in Granada. Working in a hostel, or shop geared towards foreigners is possible for English speakers as well. Like everywhere else, you can also teach English in Granada.

A visually-pleasing colonial town, and a must-visit if you’re in Nicaragua. Great laid back feel with impressive architecture but a bit quiet and small overall. It’s a bit more laid back than Leon, Nicaragua’s other colonial gem. Cheap and comfortable. Nicaraguans are extremely friendly and welcoming. The nightlife in Granada ticks most of the boxes for a small city. If you’re looking for more of a party, I’d favor Leon. For something more tranquilo? Granada is a fine choice!