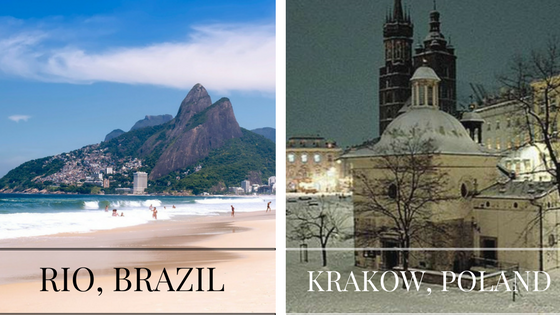 This week, we’re featuring an excellent and informative post from Ukraine Livingabout the differences between life in Latin America and Eastern Europe.

It’s a question many aspiring location independent entrepreneurs find themselves asking. Many throw Southeast Asia into that mix as well, making it even more difficult.

But let’s talk about the two extreme ends of the spectrum. South America and Eastern Europe. These two places could not be more different. Latin America is warm and sensual, compared to the coldness and rigidity of Eastern Europe.

Eastern Europe can be extremely classy, whilst Latin America sometimes feels like one big party.

See what we mean?

The truth is, one is not better than the other. Both have their plusses and minuses for aspiring location independent folks. Having spent good chunks of time in both Latin America and Eastern Europe, here are some key takeaways.

In Latin America, it’s very common for people to not attend college. It’s simply not in the budget for them. Contrast this to Eastern Europe, where everyone can go to college. For free.

Sure, not all countries in Eastern Europe are “rich”, but most of them are better off than the majority of Latin American countries. Places like Poland, Lithuania, Czech Republic, and Hungary are all extremely developed nations.

They have great and modern public transport, high levels of English, and are overall well off. Even if their currency isn’t very powerful in the grand scheme of things.

Click these links and you can compare the English Proficiency of Europe with that of Latin America.

The weather isn’t the only cold thing about Eastern Europe. The people can be frigid to outsiders, but only at first. After seeing you a few times, your local baristas in Eastern Europe will become much more friendly with you.

On the contrary, most countries in Latin America are filled to the brim with happy and sensual people. This extends beyond just the basic everyday life.

If you visit a nightclub in Colombia, you’ll see lots of sensual and warm dancing. People are not afraid of public displays of affection. Compare that to a nightclub in Ukraine, where people are giving each other much more space, if they’re even dancing at all.

(The dancing in Latin America is far, far better. Eastern European girls think they can, but they have nothing on the Latinas.)

#3: The Girls In Latin America Are Far Easier

The girls in Latin America are generally going to be more willing to hang out and date a foreigner just because. Eastern European Girls tend to be far more calculating when it comes to their romantic relationships.

This varies from country to country, of course. Generally speaking, the further East in Europe you go, the more difficult it becomes to break down the ice queens.

Especially in The Motherland.

#4: Some Are Impressed By Foreigners, Others Are Not

In both cultures, some girls will be impressed by foreigners. And others won’t. In fact, sometimes you’ll get a very negative reaction for no reason whatsoever.

It also depends on the culture they were raised in.

For example, a tall white guy will be a treat in Colombia to many girls. However, in Poland–they’re simply bored of white guys. The brown-skinned Colombian will be a knock out there.

However, if you go further east to Ukraine or Russia, that same Colombian won’t have the same success as he would in Poland.

#5: Latin Culture Is Much Flakier

In Latin culture, people change their schedules, desires, and plans on a whim. For no reason whatsoever. It’s part of the carefree, beach-vibing culture that is present throughout so much of the continent.

Latin people live in the moment. As we said before, they’re sensual. Therefore, when they feel or don’t feel something, they change plans.

This means flaking on plans, or even standing people up.

On the contrast, people in Eastern Europe generally stick to their plans when they make them. It doesn’t mean that they are easy to make plans with in the first place. But once something is set in stone, it’s usually a sure thing.

In Latin America, you might as well just flip a coin.

Many Latin foods are incredibly rich in flavor. And some of them pack a pretty good punch in the spiciness department, too.

In Eastern Europe, most of the foods all contain oil, dill, salt, and pepper. That’s about it. None of the foods have any flavor or spice to them. Nothing feels truly exotic.

On top of it, the majority of those dishes are in some way usually based around pork, chicken, or potatoes. There simply isn’t a lot of variety, even from country to country. In comparison, Latin America contains the incredible flavor of Cuban food, and grilled meats of Argentina.

You will struggle to find that level of variety in Eastern Europe.

#7: The Safety In Eastern Europe Is Better

Even in the roughest countries such as Ukraine, Eastern Europe is far, far safer than Latin America. And sure, the danger factors of many of the Latin American countries are overblown by the media of the Western world.

However, that doesn’t change the fact that Latin America simply is far more dangerous. You can’t take your phone out of your pocket when you’re walking to the gym. In fact, we didn’t even take our phone to the gym on many occasions. Walking home from the club at 3am isn’t an option.

Contrast that to Eastern Europe, where women often walk home in darkness alone. Very few security guards carry guns, and there are no gangs. Whereas in Latin America, every jeweler and pawn shop is watched closely by a man holding an assault rifle.

Simply put, in Eastern Europe you don’t have to have your guard up all the time. If you fail to do that in Latin America, that one moment might mean a heap of trouble for you.

We aren’t saying that either one of these great places are better. In fact, both are fantastic for people aspiring to break free of the corporate world.

They both have their flaws, too.

Our general advice is this: if you desire a more modern culture with higher levels of English, Eastern Europe is the way to go. But you have to be willing to deal with the coldness–both the weather, and the people living in those societies.

Latin America has a much more free spirit–it’s perhaps more suited to the adventurous types. The downside is that you may struggle to adapt, and you do have to keep your safety in mind.

With that being said, you should try both continents before you find a new home.

Whatever it ends up being, we’re sure you won’t regret it.

*For more information about life in Eastern Europe / Ukraine – including dating culture, language, food, and city guides – be sure to check out Ukraine Living!